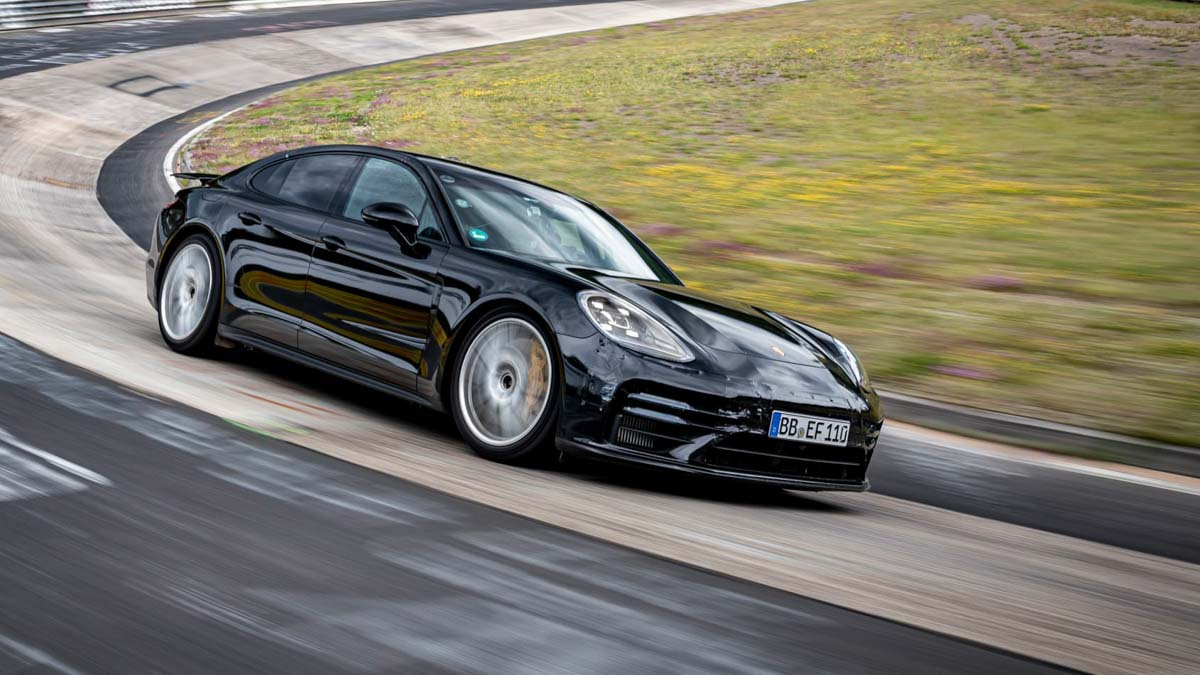 The all-electric Taycan might have overshadowed Porsche’s four-door Panamera in recent months, but the marque is hoping to shine some light on its more traditionally motivated executive by revealing a facelifted version later this month.

To kick off the new model’s launch, Porsche has revealed a series production example lapped the Nürburgring around 13 seconds quicker than the previous model, with a time of 7:29.81 – making it the fastest executive car around the 20.82 kilometre circuit.

All that separates the record-breaker from the cars we’ll see on our roads is some light camouflage and safety equipment for test driver Lars Kern. Sticky, road-legal Michelin Pilot Sport Cup 2 tyres were chosen for the record, a tyre option that will be available as an option to buyers.

Aside from the lap time, no further details on the new model have been disclosed. What appeared to be a Turbo S E-hybrid model did reveal the use of a new front bumper, however, with a more open design doing little to hide the charge coolers behind. All three standard, Turbo and Sport Design bumpers are expected to be given a refresh.

At the rear, the Panamera’s light bar is now thicker and more defined, similar in principle to the updated Macan’s rear light treatment, but otherwise the car should maintain its chunky, but still sophisticated and expensive-looking, aesthetic. The lower bumpers are also due for a slight change, with subtly reshaped exhaust outlets.

Outside of these obvious visual changes, little else is known about the technical revisions expected, but with Porsche’s rapid development in electrified powertrains, we suspect the hybrid models might gain some updated hardware, and possibly a bigger battery capacity for improved pure-electric range.

As the current-generation Panamera is now up to full strength model-wise, these updates should spread right across the current range, including to the Sport Turismo model. Although the Panamera will still top Porsche’s passenger car range, the all-electric Taycan offers a very interesting counterpoint to the traditional V6 and V8-powered hatchback and estate.