A good weekend for the Brits at the 2009 Singapore Grand Prix, with Lewis Hamilton taking his second win of the season for McLaren and Brawn’s Jenson Button extending his Formula 1 World Driver’s Championship advantage. 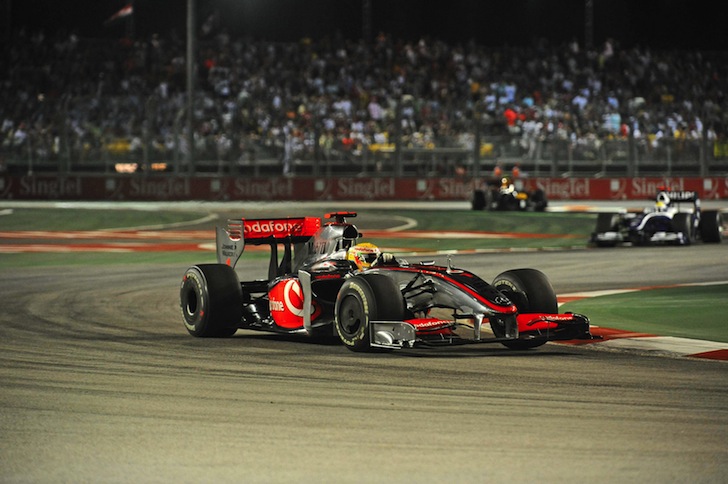 While Ferrari’s Fernando Alonso heads to Marina Bay with ‘Crashgate’ surely in the back of his mind, new-for-2014 teammate Kimi Raikkonen will be hoping Singapore will be kind on his last visit there as a Lotus driver. In 2009, tyre issues severely dinted his charge from 13th on the grid, tenth the best result possible from a tough weekend.

For reigning World Champion Lewis Hamilton however, a faultless drive from pole position to victory at the 2009 Singapore Grand Prix was yet further confirmation that McLaren had put an awful early season (in which both Hamilton and teammate Heikki Kovalainen scored just 15 points combined in the first nine races) behind it. Competition would still be tough though, Woking’s principal rivals during the final three races coming from – surprise surprise – Red Bull Racing, and Sebastien Vettel.

Having scored the team’s first ever victory at China earlier in the year, the young German had been on a charge to reduce the deficit to championship leader Jenson Button. Second on the grid was a good start, but a slow getaway plus a drive-through penalty for speeding in the pitlane meant Vettel could only salvage fourth behind Alonso, who’d been on the thick end of media questioning all weekend. A steady albeit unspectacular weekend for the championship leading Brawn outfit saw both cars come home fifth and sixth, Button extending his championship lead over teammate Rubens Barrichello in the process.

F1’s hardluck Aussie Mark Webber endured another tough race. After pulling off a blinding move around the outside of Alonso at the notoriously tricky turn seven, the stewards – some 9 laps later – adjudged the move to be illegal, and Webber was forced to let not only Alonso back through but Timo Glock as well, who’d managed to get in-between the pair. And while Webber’s race ultimately ended in the wall, a strong run for Glock netted Toyota a well-deserved second place. Nico Rosberg meanwhile was left ruing a mistake at the pit exit that landed him a drive-through penalty and lost any hope he had of challenging for victory in the Williams, and Jamie Alguersuari repeated Massa’s error one year earlier by exiting the Toro Rosso pitbox before the fuel hose had been removed.

Though some races were more fruitful than others, most of the drivers seemed to enjoy ZZ Top’s performance at the inaugural F1 Rocks.