Chaos reigns at the 2003 Formula 1 Brazilian Grand Prix, with rain ensuring several high-speed accidents at turn three and the winner’s car igniting on pitlane. And that’s not all… 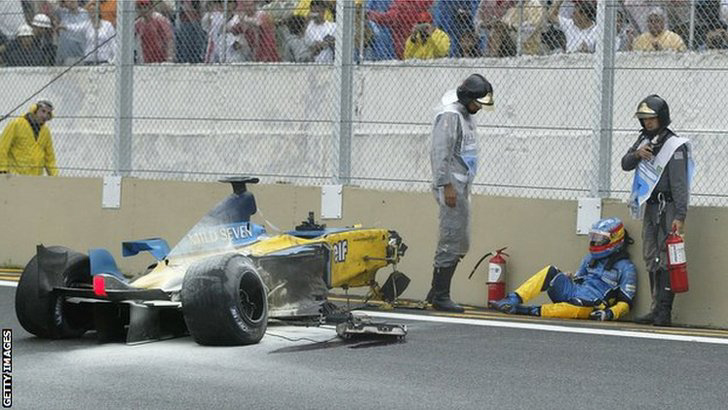 Jules Bianchi’s horrific accident at the Japanese Grand Prix has inspired race officials at the Autódromo José Carlos Pace to move re-position recovery tractors to ensure a repeat does not happen. And judging by the chaos that befell the 2003 Brazilian Grand Prix, few could blame them.

Heavy rain pre-event left track grip at a premium, and it was only a matter of time before the downhill, off camber turn three claimed its first victim, courtesy of Juan-Pablo Montoya’s Williams-BMW. He was soon joined, a little too close for comfort, by Jaguar’s Antonio Pizzonia and Jenson Button’s BAR-Honda. Incredibly, even reigning world champion Michael Schumacher binned it. With the retirement of Ferrari teammate Rubens Barrichello from the lead of his home Grand Prix, it would prove a disappointing weekend for the Scuderia.

Incredibly, more was still to come. An enormous accident for Mark Webber into the high-speed final turn immediately brought out the yellow flags, but an unsighted Fernando Alonso could not slow down in time to avoid the scattered Jaguar detritus, the Spaniard spinning violently into the wall. The resultant red flag handed a shock victory to midfield Jordan’s Giancarlo Fisichella, whose EJ13 promptly caught fire in parc ferme.

If that wasn’t enough, and owing to confusion by the race officials, the Italian would have to wait two weeks before he was officially declared the winner.