Amid the ‘will or won’t he stay’s being thrown around about Felipe Massa’s future at Ferrari, it’s easy to forget that just five years ago the Brazilian was actually World Champion. Well, for 12 seconds at least. 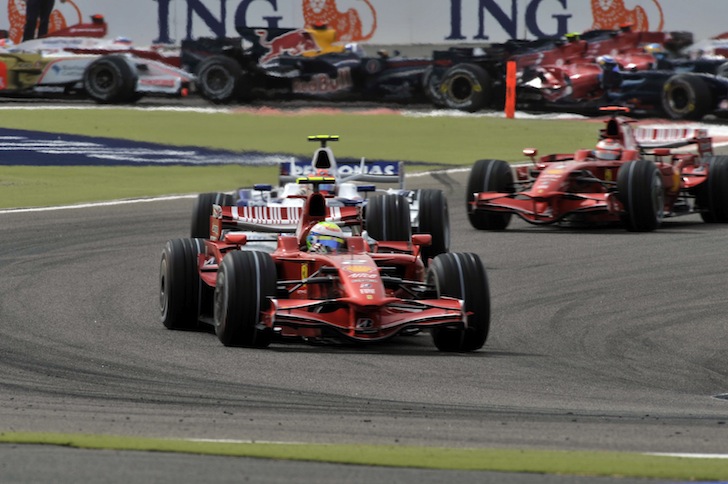 The 2008 Formula 1 season stands as Felipe Massa’s strongest yet, and though it started off somewhat tumultuously with retirements in both Australia (engine issues) and Malaysia (spin), the third round in Bahrain would be the first of six race victories for the Ferrari driver that year.

It would be Polish driver Robert Kubica though who stole the headlines on Saturday, sealing the first pole position for both himself and the BMW Sauber team. It would be a short-lived advantage though with Massa, who’d qualified just 0.03s slower, launching away from the front of the grid to lead into the first corner. Teammate Kimi Raikkonen would later make it a Ferrari 1-2 when he demoted Kubica on the third tour.

Bahrain would be a race to forget for eventual 2008 F1 World Champion Lewis Hamilton though, despite qualifying third. A poor start (not helped by his anti-stall kicking in) knocked him from 3rd to 9th, though the Brit did manage to avoid the melee that ensnared Toro Rosso’s Sebastian Vettel, Honda’s Jenson Button and Red Bull Racing’s David Coulthard. The latter two would collide again on lap 8 whilst battling in mid-pack, but future three-time champion Vettel was out on the spot on lap one.

An early collision between Hamilton and Reanult’s Fernando Alonso caused the most controversy, the feud between the two former McLaren teammates still a hot topic in the paddock. In the Spaniard’s slipstream in the early going, Hamilton mistimed a move for position on the run out of turn three and ended up running right up Alonso’s right rear tyre. Both would recover but a hard-fought effort back through the field netted just 10th for Alonso and 13th for Hamilton. Up front, race winner Massa – having dominated the event, despite a late charge from Raikkonen – was all smiles.