Neither are what you would call subtle, with sharp bodylines and aggressive features dolled out across both. There is though a slight difference, namely the elegance amidst the sportiness on the 435i M-Sport. For all its bonnet grooves, air-intake-heavy front bumper and sharpened lines down the flanks, there is a magnificently delicate swoop to the bodylines, cheeky 17-inch alloy wheels, an understated arse, and sleek-as-you-like kidney grilles. BMW has even managed to restrain itself by putting just two ‘M’ badges on the M-Sport model. It’s an elegance that continues on the inside. Yes, I still maintain that the centre console is much too cluttered and the wash of technology is a little unnecessary. But as we proved with a 500km trip across Portugal on the international launch, the seats are ridiculously comfortable yet simultaneously supportive, there’s plenty of head and legroom, and – given the German build quality – likely to outlast even the sands of time themselves. It’s a balance between sportiness and comfort the BMW has managed to hit nicely.

Then there’s the Camaro ZL1, whose emphasis on sportiness borders on fanatical. Quite apart from the whopping great bonnet scoop, glaring headlights and front splitter, we have those enormous 20-inch black wheels, a rear spoiler, and enough ZL1 badges to leave you in no doubt which Camaro you’ve bought: subtlety, thy name is not Chevy. It’s a similar story on the inside, where the aggressive sloping roof means 6’ 2” of me can’t sit upright properly, gauges in front of the enormous (and slightly agricultural gearlever) announce oil temperature and battery life, and the very plastic paddle shifters ironically evoke less enthusiasm to thrash the six-speed gearbox than the BMW’s metal ones. Unsurprisingly, you can also forget Eco running in the Chevrolet (one of five driving options on the BMW), your choices between Tour and – many levels of – Sport. And given the multi-link strut suspension included for maximum road holding in the Camaro, you can’t really say the difference between the two is stark. It’s victory for the BMW then: whereas the 435i M-Sport could be right at home at either a drag strip or the Chelsea Flower Show, you can’t really say the same for the Camaro. 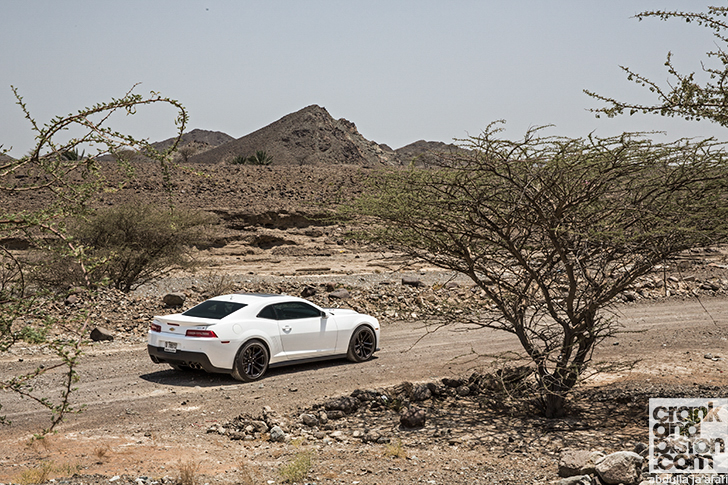 Now it does sound like I’m being unnecessarily critical on the Camaro, but once Arnold and I have swapped keys, I realise how little of the above really matters. Of course the Camaro is styled more aggressively, and of course the American interior is less refined than the European counterpart. To expect otherwise would be ridiculous for a down-and-dirty muscle car whose point is power. Lots, and lots of power.

The aggression under hard acceleration is simply astonishing. I’m suddenly aware as we find an empty stretch of deserted tarmac and leap on the power, just how unforgiving that supercharged V8 under the bonnet is: should my lungs shift to the other side of my body under acceleration, well then that’s just too bad. It’s an aggression that doesn’t dissipate the further up the rev counter we climb, 1000s or rpms being ticked off with gay abandon as the Camaro’s nose hurtles its way towards the horizon, those 580 stallions making the back end incredibly fidgety to make sure you really are paying attention. The sensation of speed, and – yes I’ll say it – adrenaline is impossible not to grin at like an idiot, and whilst the weight at the steering wheel and grip at the front end, though impressive, isn’t quite as intuitive as the BMW’s, the Camaro’s dynamic nature makes me wonder if my hypothetical $70K would be better spent on the muscle. The enormity of the V8 soundtrack alone makes that a real possibility…

Right about now would be a good time to sign off with a witticism and a shot of the Camaro smoking its way into the sunset. But there is an issue stopping me from doing this. 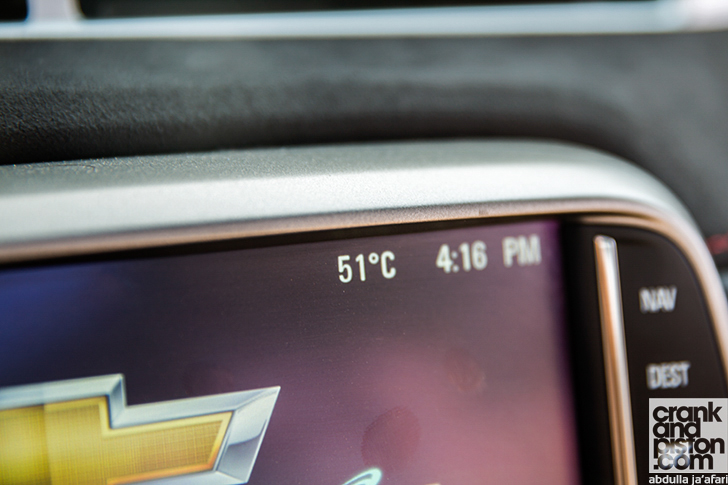 I’ll admit that, since we picked up the ZL1 ahead of the test drive from GM’s Dubai service centre rather than the showroom, we did not allow Chevrolet Arabia as much preparation time as they would generally like, which may go a long way to explaining why the air conditioning in the Camaro stopped working after a few hours. I’m not sure if you’ve ever been in a muscle car in 51 degrees with no air conditioning, but trust me, you quickly begin to run out of shirts. It was perhaps this though that helped our mobile sauna with its fuel consumption. We had expected the big, thirsty V8 to run dry much quicker than the BMW’s six cylinders, and yet high in the mountains, both hit the fuel gauge red zone at almost the same time, leading to an impromptu – and slightly nerve wracking – drive back through the mountains to the nearest filling station.

Anyway, enough waffle. Which is the $70K sports coupe for us? There’s no denying that the drama, sense of occasion, and downright hilarity of the Camaro ZL1 is unlikely to get old: 580bhp at the mercy of your right foot is the best therapy we can think of after a long day at the office. And for all my talk of ill-refined cabins, it has to be said that the Chevrolet is not as raw as you might think in terms of ride comfort and seating: my back was not pummelled to dust after a full day on the road, nor did my legs need to be hacked off at the knee in order for me to fit in. Then there’s the 435i M-Sport, which will serve its purpose nicely and offers all the sportiness of BMW’s M Division without sacrificing the finesse Munich’s finest are well known for. 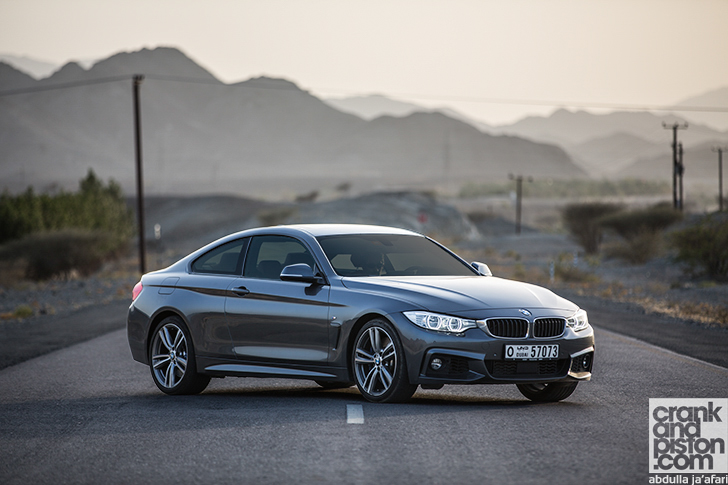 It’s a tricky decision then, but for the fine balance between lairiness and practicality, I still find myself coming back to the BMW. The ZL1 is a fantastically exciting car to drive like a lunatic when space and terrain allow, but it’s unforgiving aggression– from the acceleration to its looks – may well begin to grate on a day-to-day basis, an issue I doubt you’ll find with the BMW. Yes it’s a little more expensive than it should be and its convoluted infotainment system can drive you round the twist, but there’s no denying that the poise and balance through the turns and the surprising lairiness of that 306bhp six-cylinder make a heady combination.

European civility then has won out over American muscle. Now I just need the $70,000…