This, right here in Dubai, is the Chevrolet Camaro ZL1. And let’s not mess around: it’s a complete animal! 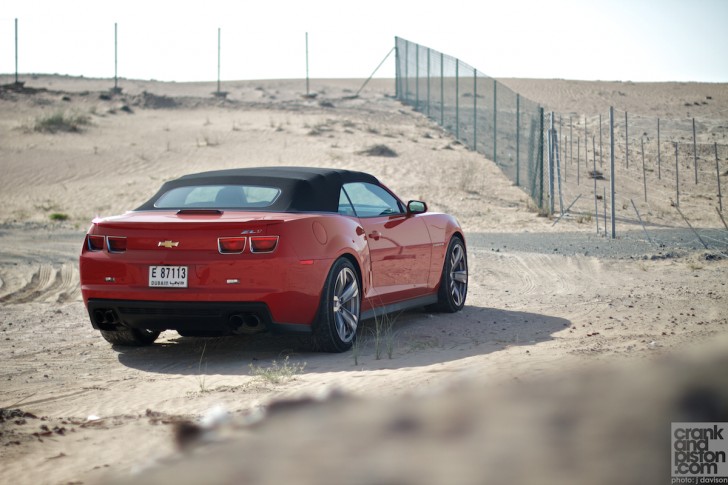 Inspired as it is by the short-lived all-aluminium racing engine of the same name that enjoyed a 69-strong production run at the end of the 1960s, the Chevrolet Camaro ZL1 is marketed as ‘the most technically advanced Camaro in history’ and a beacon of high-performance. With that in mind, General Motors went straight in at the deep end by throwing a 6.2-litre supercharged V8 into the cavernous engine bay and ramping the horsepower needle up to 580 and torque figures up to 556lb ft. Compared to an LS3 SS Camaro’s 426hp and 420lb ft respectively, and 556hp and 551lb ft for the Cadillac CTS-V from which the unit is derived, these could hardly be called shabby. 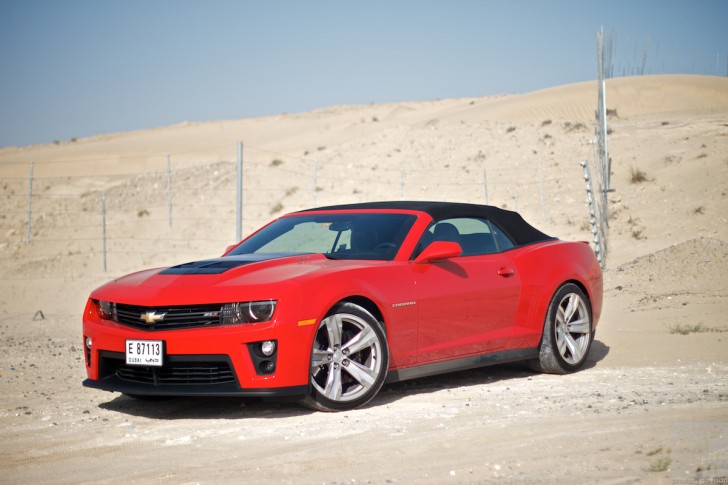 Figures such as these, plus revised downforce-optimising aerodynamics (including a new front splitter and rear spoiler) and new Performance Traction Management which modulates engine torque for better acceleration, ensure the new ZL1 can rip through 296kph, hit 100kph from standstill in 3.9 seconds, and lap the Nurburgring in 7m 41s: Porsche 911 GT3 and Lamborghini Murciélago territory. 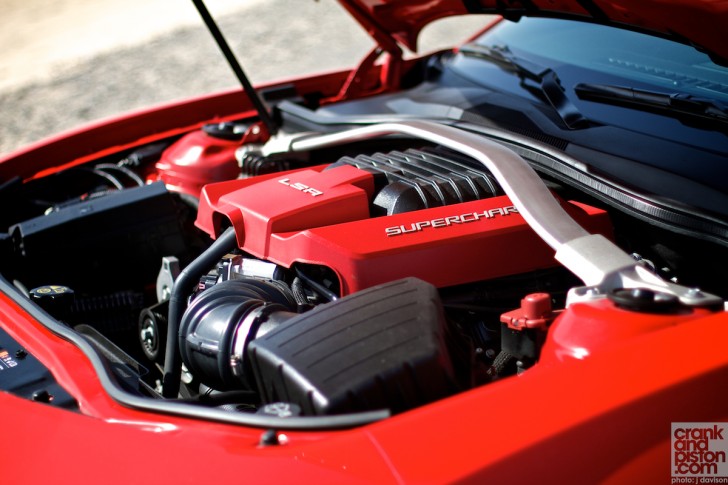 In short, the Camaro ZL1 is not for the feint of heart, a message that is further emphasised when the big V8 is fired into life. The guttural roar that emanates – and which is heightened depending on revs by a new dual mode exhaust system – is likely to bowl you off your feet. Frankly you’ll be lucky, should you choose to start the ZL1 in a multi-storey parking lot, if the roar only sets off the alarm of the car sitting next to you: there’s enough bass to put the windows through too. 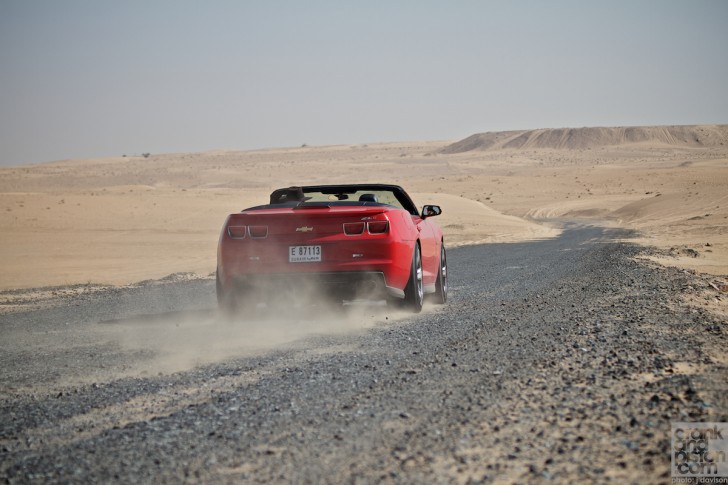 Clearly then, this is not a car for crankandpiston to inflict on civilised society. Indeed, tapering the ZL1’s performance and mannerisms would be missing the point entirely. The only salient option then is to hit the vast stretch of desert outworld, where only the fittest survive…

…yep, we’ve gone a bit Troy Queef with this one. 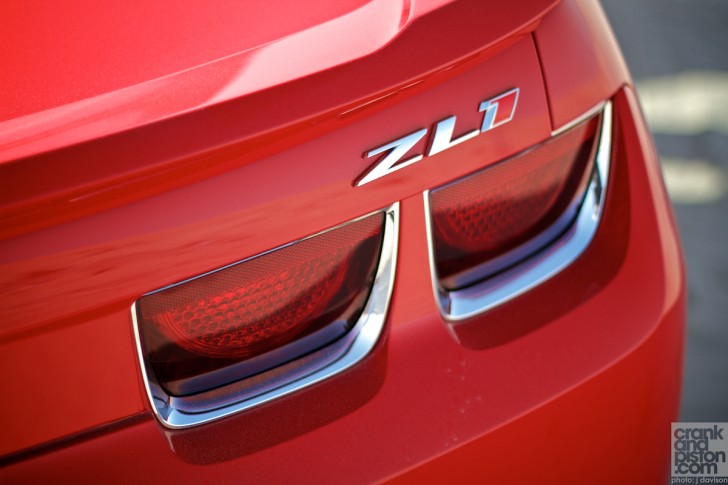 On looks alone, the Camaro oozes grunt. The flared wheel arches house an enormous set of ZL1-spec 20-inch forged aluminium wheels (five-spoke, naturally) which offer a suitably beefy expression to the car all on their own, as does the elevated rear ride height and resculpted rocker panels running the length of the car between the front and rear wheels. Then there’s the gaping carbon fibre air inlets dug deep into the bonnet, which both cover the intercooler and pulls air from the radiator, and offers an arc of aggression reminiscent of any 60’s muscle car. 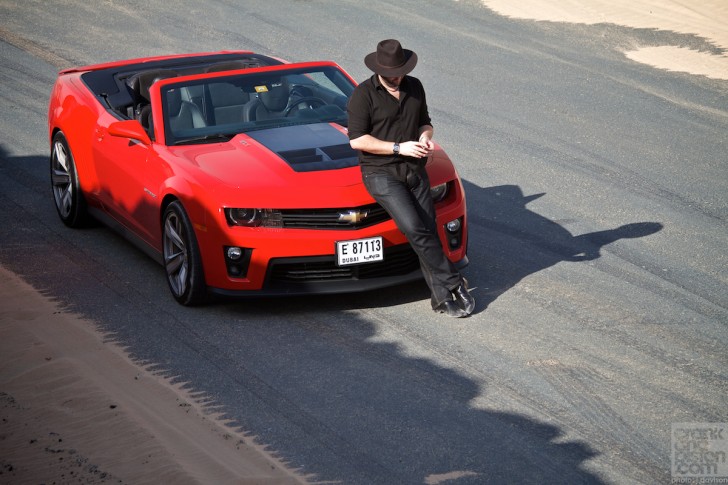 The big style point though is the canvas roof, and Mr Sits On The Fence here is finding it difficult to choose between the coupe of convertible models. What’s possibly holding my decision back is performance of the foldaway canvas roof: it takes a good 15 seconds to stow, and requires both a tray to be repositioned in the boot (to give way for the mechanisms) and a ratchet handle to be unfastened in the cabin, not too mention the aesthetic cover that needs to be fitted manually afterwards. Two or three minutes out of your day is but a trifle, but it does mean you’ve got time to make up on your journey when you slot yourself back into the figure hugging (and ZL1-embroidered) leather seats, press the Sport button and hit the go faster pedal.

You’ll probably need one hand on your Stetson as you do this, since the supercharged V8 will immediately try and swing a devastatingly powerful haymaker at your lower jaw, while the rears fight like caged beasts to break free from your grip. Throwing all 580 horses at the tarmac – or slightly sandy dirt road – in unison is immensely entertaining, especially when they hit full steam at 6000rpm. The acceleration is incredibly aggressive, and the speed pick-up frankly staggering.