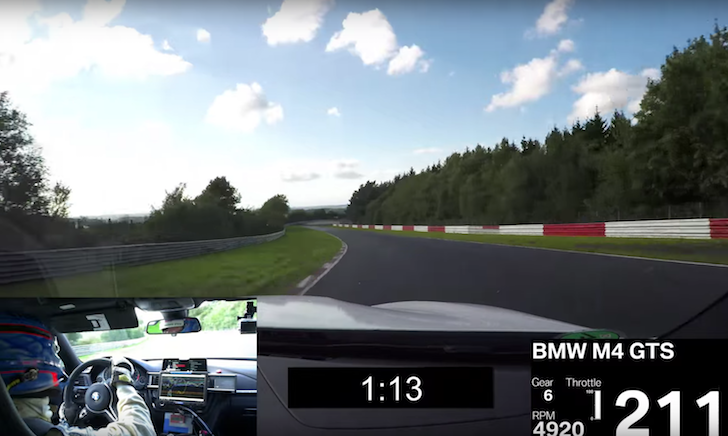 It was really only a matter of time before footage of ‘the sharpest M4 of all time’ being thrashed around the Nürburgring was released. Said demonstration lap – on par, incidentally with the Ferrari 458 Italia, McLaren MP4-12C and Mercedes SLS AMG GT among others – was conducted by BMW M development driver Joerg Weidlinger. And yes, given the speeds he achieves on the Green Hell, the man is clearly insane!

Limited to just 700 examples worldwide, the M4 GTS uses the same 3-litre TwinPower Turbo six-cylinder as found in the production-ready M4 and M3, but kicks 425bhp up to 500bhp, blasts out 16lb ft more (a total of 442lb ft) and hits the ton from standstill in just 3.8 seconds. The traditional M-spec diet means carbon-fibre bucket seats, door pull loops in place of door handles, and lightweight centre console make an appearance to lower the kerb weight to 1510kg, while a seven-speed M Dual Clutch transmission completes the drivetrain.

For those of you just wishing to hear the BMW soundtrack – plus a bit of rattling, the below Vimeo video is the one for you. If you’d like Herr Weidlinger’s thoughts on his run, then try the YouTube link with commentary at the bottom of the page.