Ford Edge. Behind the scenes of a regional first

How do you spell the word ‘Edge’ in 50m high letters using dozens of Ford vehicles? crankandpiston.com finds out behind the scenes with the new Ford Edge

Activations. Marketing-led and media-targeted, they’re a means of unveiling a company’s brand new model to potential customers in characterful – and more importantly – headline grabbing fashion. And traditionally, they can be fairly predictable: turn-up, shake hands, free nibbles and quaffable bubbles, speeches, unveil/’activate’ model, hearty applause, off we duly pop to spread the word via re-purposed press releases. Today though, things are a little different.

While manufacturers are busy dropping the silks from their latest model or concept 7,000km away in Paris, we are here with Ford conducting a ‘regional first’ as part of its promotional material for the new Edge. Not only has crankandpiston.com been given exclusive time with said mid-sized CUV prior to the filming, we’ve also been invited to take an active role in the filming. Today, in a dedicated sand lot a stone’s throw from Dubai Mall and the Burj Khalifa, Ford Middle East will spell out the word ‘Edge’ in nearly 50m letters using dozens of full-sized vehicles, and has recruited crankandpiston to be a part of its line-up for the day.

The complexities involved are mind-rotting, not least because finding over 35 cars and drivers requires much more than just a round-robin email. For increased drama, we’ll also be shooting at night, and thus working within the limited light such a venture entails. The final image will be shot by a drone, but to make sure each letter fits within the frame, the camera must be at least 30m in the air. This requires not only a steady hand by its operator but damn-near perfect weather conditions, and the approval of both military and governmental officials in Dubai, who rarely take kindly to unapproved drones or small aircraft buzzing around the region’s most famous landmark.

We cannot display this gallerya three-star Michelin restaurant? Simple. As its sole representative in the fastest growing vehicle segment in the world, Ford can’t afford to do things by half if it wants the buzz for its new SUV flagship to spread. Go big or go home.

On-site, we’re met by Ford Middle East PR and marketing executives Jodie and Sue, who quickly resume their positions next to an enormous electric fan beneath a temporary marquee, GHQ for today. The humidity is beyond ridiculous, my fogged-up sunglasses rendered useless as soon as I step away from the Edge’s air conditioning. Ironically the temperature doesn’t seem to have dampened the Ford team’s enthusiasm.

We’re still almost four hours away from kick-off, but already there’s mounting amounts of hustle and bustle: at base camp, an enormous generator is busy whirring away to power the oversized spotlights, yet more fans for VIPs and my fellow drivers, and myriad extension plugs that wind their way around the temporary campsite, charging almost three dozen camera batteries (it wouldn’t do to for the camera to fail whilst the drone was mid-flight). Directly behind us, an enormous scissor lift is being slowly manoeuvred into position, to be used later when photographers grab the ‘hero shot’ of all vehicles in position. Even Jodie and Sue are busy marking the gradually growing collection of keyfobs on a Ford-liveried oil drum, today’s equivalent of valet parking.

“The film crew have enough to be getting on with,” Jodie explains, “so we’re taking responsibility for the cars and drivers. We need to make sure nobody wanders off with the wrong key and get everyone to the correct vehicle at the right time.  That’s where you come in. Don’t be late!” 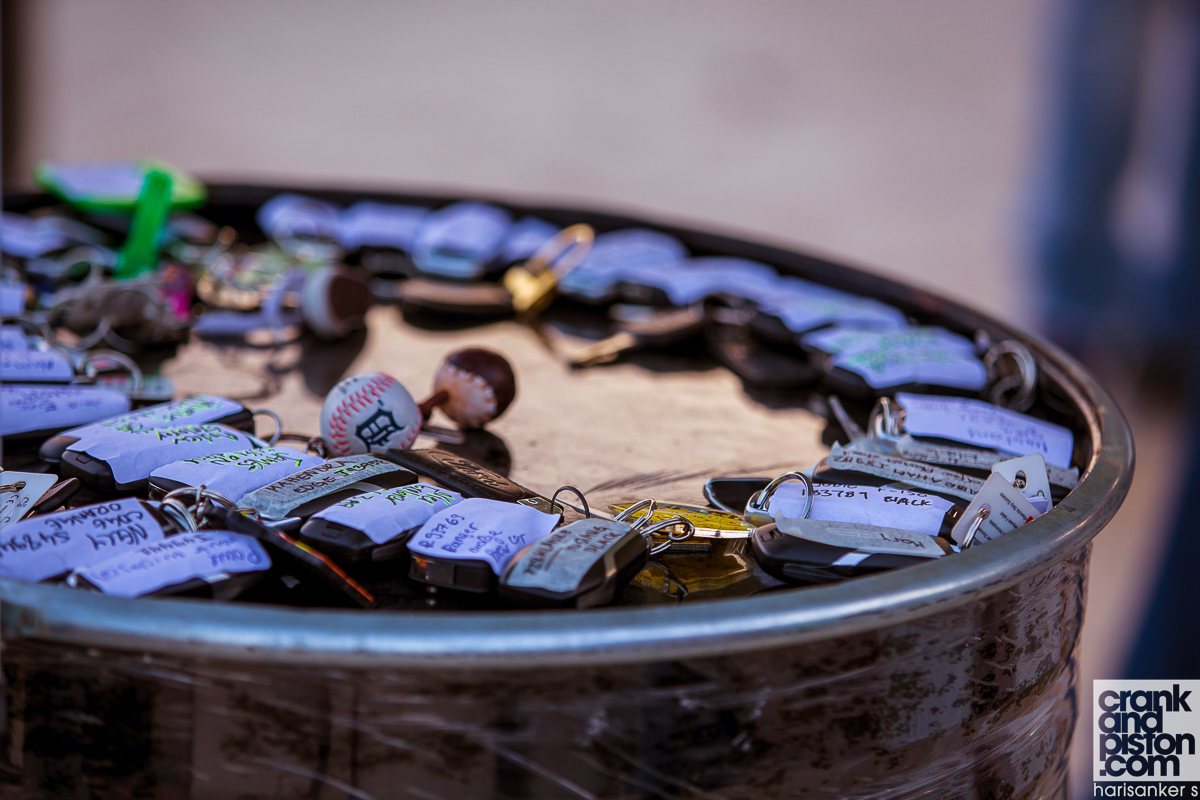 Orders dutifully received, and with half an eye on my watch, I take a wander towards base of operations where the star of today’s shoot – alongside the Edge itself – is being given its final prep. It’s a professional drone, weighs over 3KG, is capable of ascending 200m within range – we’ll need less than half that – at speeds of up to 5m/s (20kph).

Hovering in mid-air for such an extended period of time is tricky but not impossible thanks to gyro stability and the combined patience and experience of Bjorn and Cedrick, today’s operators. The controls lie on a makeshift bench next to me, and I’m reminded of the radio controlled monster truck – curiously, also a Ford – I owned as a child. Presumably today’s flight won’t be scuppered by a giant skirting board or carpet runner, but while I’m keen to ask the duo for a demonstration, they’ve just stepped into a team debrief led by director John. He has a hand-drawn storyboard hanging from one of the marquee supports, and a collection of miniature cars on another table shaped in the form of a ‘D’. It’s as I take a candid peak at proceedings that I’m reminded of the old adage ‘you’re only as good as your tools,’ and today that includes me. All but four of the cars will stay locked in position ready for the final shot, the remainder simultaneously pulling into their final positions as the drone is filming above. Just one errant parking position by a driver could potentially bollocks up several weeks of planning. Go big or go home. Suddenly the nerves at valet parking make a lot more sense.

By 7pm, all 50 vehicles required have arrived, and John and his team set to work aligning the first letter, using aerial shots from the drone as reference. Just this one letter takes an hour to get right: in front of the fan, also watching proceedings, Sue  says “I’m glad we’re not promoting the Expedition tonight”. 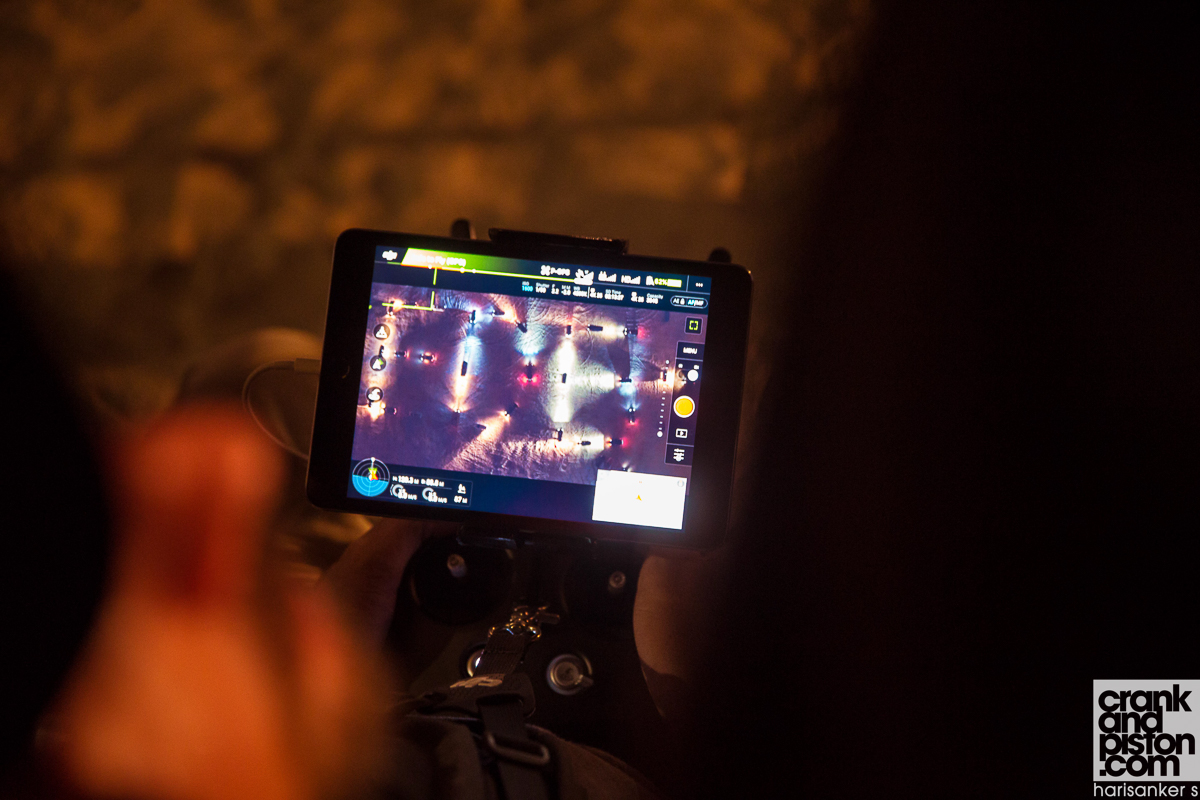 And yet, with one letter in the bag, the mood begins to change: there’s still tension but there’s an almost tangible sense of relief that things are underway. One of the car owners props an iPhone with a battery-operated loud speaker by the generator and soon the soft buzzing of the drone and the more industrial whir of the generator are joined by ZZ Top and The Rolling Stones. Elsewhere a couple of footballs have emerged as has a family dog, while over at the food truck, many are settling into their beanbags, shish taouk in-hand, to watch proceedings take shape.

By 9pm, we’re finally ready to go, all shots but the final ‘hero shot’ completed. On my belt, my radio crackles as we’re told “drivers, positions please.” crankandpiston’s Edge joins three similar models on the sand lot and we’re given our reference points in the dirt, just large enough to be seen by the drivers but not quite distinguishable to the drone. It’s been a long, humid night but everyone is still in good spirits, and as the four Edges pull into position – several times, to make sure ‘the money shot’ is in the bag – the director calls a wrap on shooting, and a happy cry goes up in the watching crowd. In our own collective ways, we’ve all played a part in a regional, and maybe even a world, first.

Enjoy our behind the scenes feature?

You can check out more of our Ford features HERE

Previous ArticlePorsche vs McLaren vs Audi vs Mercedes-AMG
Next Article TEASER. Climbkhana with 1400hp Hoonicorn V2