There’s a new hypercar that’s all about performance, not luxury. It’s made in South Africa, it’s been in development for 12 years, and it’s here in the UAE.

How often have you heard of a small, independent supercar company that’s emerged from nowhere, promised the world, then vanished within a year or so? It happens a lot. History is littered with false dawns of homemade performance cars that have rapidly turned into bankruptcy and dashed dreams. So why should South African enterprise Barnard be any different?

This family-owned company has just built its first production spec supercar – the Le-Mans-meets-muscle-car BTR700, and it’s come to the UAE along with its prototype sibling, the B7, to attract potential customers. But what may mark Barnard out as different from the littered carcasses of other small-volume manufacturers is that it’s already been going for more than a decade. And, crucially, the family behind the company won’t really mind too much if their creation doesn’t prove a hit with customers.

For Barnard – run by director Chris Barnard with other members of his family in Bloemfontein, South Africa – this is a labour of love, a project that came about by chance, and not one that’s been driven by a desire to make money. The family has run a successful security company for more than 40 years, and from that developed expertise in manufacturing and managing projects for government and the military. The fact that they were all petrolheads was a mere aside.

Then one day, an engineer announced that he’d acquired plans for a monocoque from a Porsche 962 Group C Le Mans prototype. And from there, an idea was born – what if the workers at the company could produce a supercar? After all, they had the funds, the will, and manufacturing expertise. How hard could it be, right?

“I will never forget that my next question to the engineer was how long did he think it would take to do this,” Chris Barnard recalls, as we sit in Top Line Motors, the company’s dealer in Dubai. “We do very large projects and fast track them, and he said he thought a couple of months. This was in 2002.”

The plan was to try and build a new type of car, based on the raw performance of a European Le Mans prototype, but using the brutal power of a tuned American muscle car. It needed to be a machine not restricted merely to racing drivers, but that anyone with enough money could buy, aimed principally at gentlemen drivers that would use them for track days. Longer-term, Barnard hopes to develop the car to be road legal, but first things first.

It wasn’t until 2009 that the first prototype rolled out. “We took it to a motor show and it had a fantastic reception,” Chris says. “We were invited to other motor shows after that but we pulled it back so that we could develop it further. That’s the danger with these things, you keep on developing it but you have to stop it at some stage and say ‘that’s more than good enough, put it in the market’. That’s where we are now. What we have is very, very good.”

Both the prototype and the first – and so far, only – production Barnard car are quite something to behold. As Chris explains, they mix the aerodynamic, compact shape of Group C race cars with the more brash element of American muscle – most notably with chrome wheels, but when the key is turned inside, with an ear-splitting big V8 bellow. The mid-mounted engine in the BTR700 is a 7-litre General Motors LS7 V8 with 700bhp, which drives the rear wheels shouts it intentions through side-mounted exhausts. Because side mounted exhausts are cool.

This BTR700 is only the tip of the iceberg for this car – Barnard has developed two other engine packages that boast 1100bhp and an insane 2000bhp through full race-spec engines and turbos.

Inside, the cockpit is a bare bones environment, with everything set up either for ease of use or to make the driver feel awesome – witness the bank of dials and the plethora of switches on the ceiling. Because ceiling switches are cool. There are no electronic aids, save for air conditioning and power steering.

Traction control might be your right foot, but Chris said the car is surprisingly easy to drive. “You don’t need to be an amazing driver, it’s very forgiving. Obviously with 700bhp, 1100bhp and 2000bhp you will need a good amount of respect for what you have, but if you drive it moderately it’s very forgiving and giving in the feedback that you get and how it takes care of you.”

It’s taken some 12 years for the car to reach production – a product of refinement using both South African and American engineers brought in to test drive the development vehicle. It’s a car designed solely to put a smile on the driver’s face and provide monstrous performance, as Chris explains.

“This thing is not in direct competition with Ferrari, Lamborghini or Porsche. They have a certain build regime in which they work to build very refined cars. We’re trying to provide a look that you can’t find out there, with a horsepower package that’s very rare. Very few people in the world build high horsepower cars like that. In fact, our main competitor in terms of horsepower would be Koenigsegg and Bugatti. But again, they’re in a totally different bracket.”

Is there a market for this gloriously mental machine? Barnard clearly thinks so, and it’s certainly hard not to crack a smile at the insanity of it all. But even if it doesn’t work on a commercial level, Chris says it won’t be the end of the world.

“The biggest accomplishment here has already been reached,” he says with a smile. “This is the biggest part of what this endeavour is about, to be able to say ‘we’ve done it’. The marketing and making money is secondary. It needs to happen now, but it’s not the absolute purpose. We’ve already been successful in that the car is running, we’ve conquered the technology.

“Even if I never sell a car, I won’t consider it a waste of time. I’ll have two of the most beautiful cars in my garage.” 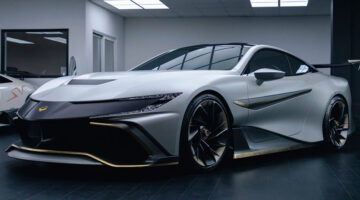