Our man takes on the Audi RS7 for crankandpiston.com. And is in for a surprise.

Usually I’m not one for launch control during road tests, since a) it tends not to be particularly conducive to everyday driving, b) the idea of launch control I’ve always thought a bit loutish, and c) the potential bollockings from local PR teams ‘who rather we don’t use it’ would be herculean.

On this occasion though, with a stretch of completely deserted and bullet straight tarmac in front of me (and the peer pressure of the crankandpiston editorial team still ringing in my ears), I’ve weighed up the pros and cons, and figured ‘meh, sod it’. As such, you find me at the driver’s seat of the ‘new’ (read ‘updated’) Audi RS7 Sportback, selecting Sport +, turning off the traction control, pressing the brake pedal hard down, and raising the revs with my right foot into the mid 4/5000rpms. A 3-2-1 countdown from my colleagues through the windscreen, I lift the left foot, and we’re away. 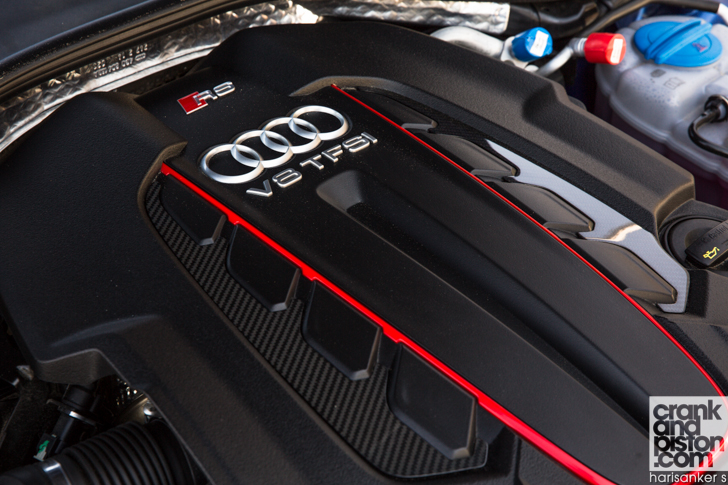 I am temporarily speechless at the speed and ferocity, and frankly staggered that the 4-litre TFSI V8 under the bonnet is kicking out ‘only’ 552bhp and 516lb ft of torque. There has been no trace of wheel spin, no hint of tyre squeal. It’s all business, and the RS7 has shot from standstill to the ton in 3.9 seconds. I assume: through watery eyes it’s difficult to keep time on my iPhone. Regardless, it’s absolutely incredible, but for a fast Audi, not altogether unpredictable.

Where we’ve drawn issues with fast Audis in the past at crankandpiston.com is that they tend to be superbly quick, composed and comfortable, but struggle to truly engage thanks to alienating handling and rather clinical character. And on first impressions with Audi’s latest updated ‘Rally Sport’ model, we have a similar issue to contend with.

The updated RS7 comes fresh with new Singleframe grille with black honeycomb detailing (exclusive to the RS range), a revised bumper and exclusive LED headlights, which just about covers the design headlines. It’s still a handsome car, the sleek-backed roofline, snarling front grille and super slick headlights giving a suitably aggressive look. Less so on the inside, where Audi’s traditional fine build quality, premium materials and passenger legroom focus more on the comfort side of the batshit spectrum. Stick drive mode in ‘Comfort’ and there’s little difference in ride quality twixt the RS7 and the über premium A8 L we have on long-term loan. Save a little less head and legroom and controls for the infotainments system in the rear armrest. 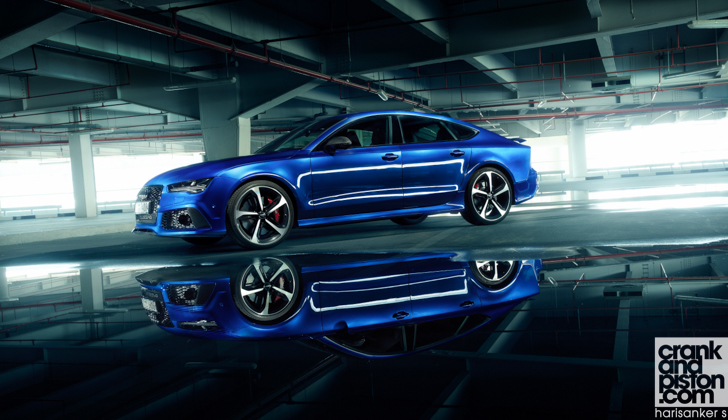 Fast, practical, premium and good-looking. Surely what every self-respecting petrolhead with a healthy bank balance and a heavy right foot is looking for. And on paper at least, the RS7’s handling is up to scratch too. RS-exclusive adaptive air suspension, which cuts the ride height by 20mm, makes the cut on the cribsheet as does Dynamic Ride Control, which reduces bodyroll in the corners via some kind of witchraft through the shock absorbers. This – alongside über sticky tyres – allows the RS7 to grip through the corners and move your spleen from one side of the body to the other (your body itself will remain steadfast thanks to those leather-clad buckets). No lean, no understeer, no sense of impending peril or a twitchy back end, thanks to the company’s always spectacular Quattro all-wheel drive system. Moreover funky red brake calipers hint (or smack around the chops) at the ventilated discs beneath, meaning stopping power is pretty immense albeit not at the expense of good travel and feel through the pedal.

The ultimate driver’s toy then, yes? Not quite, and the issue – as it has been in the past – comes back to the handling. Speed-sensitive steering may make cruising through town a breeze, but there’s very little grey area between cruise and slow speed runs, between heft and lightness. There’s little play in the steering, and just enough weight to keep you connected with the front wheels, but it all smacks of electronic assistance. Where’s the engagement? Where’s the sense that I too have something to do with controlling the vehicle’s direction? Don’t get me wrong, the RS7’s handling is still superb, the final blue ribbon on, what is quite honestly, a quite brilliant GT car. I just wish that, given the electronic gubbins doing their bit to relieve the driver of all but the most basic of driver inputs, it didn’t leave me feeling as cold as it ultimately does.

But yes. I did turn around and give the launch control another go.