Travelling to England and Wales to put the all New Range Rover Sport to test. No worries, I got this.

The first Range Rover Sport was phenomenally successful, selling a stack more units than anyone could have envisaged when it first appeared in 2005 continuing on to have its best year last year remarkably. The Sport offered off-road capability, sharp looks and a focus the likes of which had never been seen before out of Land Rover. Many loved it, others didn’t: were you an extra in Snatch with criminal undertones, if so, it was ideal.

So of course, when news spread that a second gen version was on the horizon, expectations were high. And we’re in the UK to find out how well they are met.

It’s certainly fair to say the new Sport boasts a handsome, more contemporary look than the outgoing model. Resplendent in its sharp white suit, the Sport is a million miles away from the car it replaces in terms of looks. Gone are the slab sides, heavy waistline and slightly aged look of the outgoing P38, replaced by an Evoque-inspired elegance. There is something about that rear end in particular though that doesn’t grab me: the sharp lines work well on the Evoque, but those aggressive concept lines haven’t made it through to the final design of the Sport. Which is a shame yet totally understandable now the car offers a seven-seat configuration. 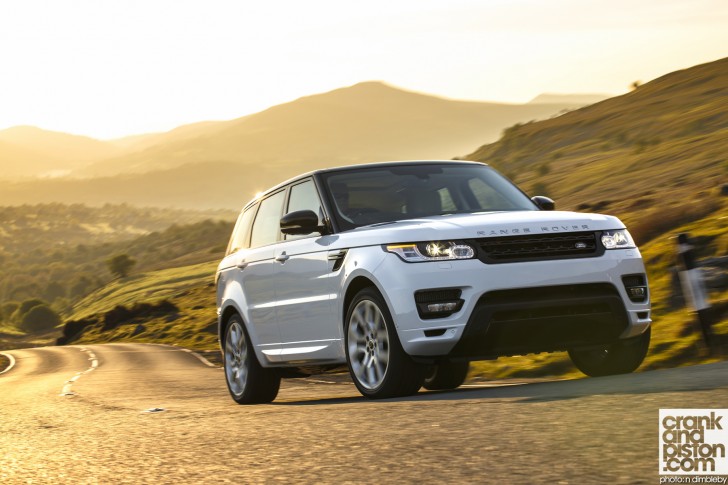 There’s more to this style than just renewed vigor in the Land Rover design studio: the new body goes atop a brand new frame. Replacing the effective yet slightly odd double chassis – which offered incredible stiffness but weighed a ton – is a super stiff all-new aluminium art piece. Designed in conjunction with the new Range Rover, the chassis is also considerably lighter than its predecessor. Consequently, not only does the weight-shedding tactic save you a few quid on fuel bills it also provides the Sport with potential. And lots of it.

To put this to the test, our route encompasses stunning scenery, thick claggy mud playgrounds, and fast flowing ribbons of tarmac stretching hundreds of kilometres across the countryside. Before all that though, we have – what appears to be anyway – a wannabe WRC gravel rally stage.

The 510hp 5.0-litre supercharged V8 powerhouse up front provides mental levels of pace, with a 0-100kph time of just five seconds. It is bonkers fast, a proper hooligan when required, and the speed it gathers from seemingly nowhere continually takes me by surprise. It is slightly unsettling and possibly a bit much for me, but there’s no doubting that it’s utterly intoxicating. After all, it’s not often you get the ability to push a car to the limit (well, human limit anyway), so when you do, you leap in with both feet. We weren’t exactly hanging about on the loose stuff, so let’s just say the suspension set-up and much upgraded aluminum bits were earning their keep. 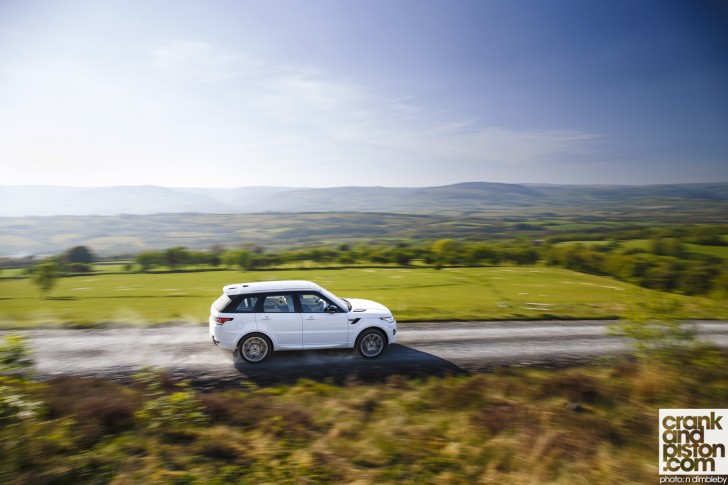 So too was the newly stiffened chassis, the dimensions and design of which make the Sport feel tight. Aided by the ‘Fast Jag’ feel to the drivetrain, the Sport is more than happy to tackle these mountain stretches without turfing you into the scenery. One thing that does strike me though as the tyres skim the grass banking is the Sport’s width. It’s pretty chunky, on a par with the girth of a Lamborghini Aventador. Saying that, not once did oncoming traffic have me fearing that metal scraping on metal was inevitable. Gunning it from corner to corner, with big lairy power-slides on the exits (42/58% front/rear split) and a dab of oppo sliding to the entry, the Sport was beginning to feel like a proper weapon.

Though you wouldn’t think it in the cabin, which is as luxurious as its bigger brother. The quality of materials is cracking, the stitching superb, and the upholstery a piece of art in itself. Execs at Overfinch and Kahn, or any of the usual Range Rover butchers, will have to up their game significantly. Gone also are the NASA switchboard of buttons on the old model, everything now controlled via touchscreen or imagination. There are a couple of niggles though. For all its beauty, three strips of plastic on the dash seem to have been ripped straight from an old Mondeo, the front passenger will almost certainly knock their elbow on the extended b-pillar, and it’ll take you twenty minutes to locate the electric window switches. I’m being picky here though as the place is special.

The journey so far had circumnavigated any particular tricky sections of tarmac, but after a quick pit stop in a restaurant Land Rover had erected specially for the event beside a stunning lake, it was time to test the Sport on tarmac, and some Welsh back roads. Destination, Eastnor Castle. On the easy-to-use satnav screen, the winding rolls of tarmac looked positively hedonistic. Less a couple of chaps on their KTMs enjoying their own spot of hooning, the roads were all ours. Dynamic mode activated and manual mode engaged, it was time to get our hustle on. If the Sport – a big 4×4 built for the road less travelled – was going to let its guard down anywhere, it would be here. 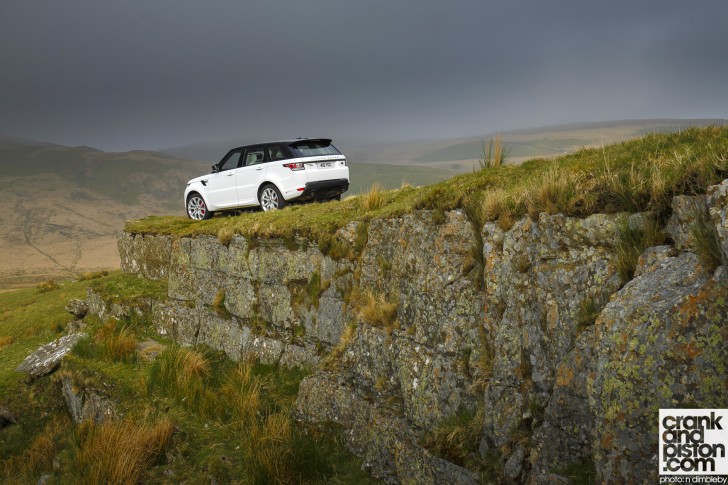 You see, mix in 510hp, slightly greasy roads that are tight and twisty, and Land Rover’s desire to run All-Terrain tyres, and we have a potential chink in the armour: more than a few of us were a little skeptical pre-tyre blazing run, assuming that the tyres would significantly knacker the grip levels. As it turns out, we were wrong. Dead wrong. There is prodigious levels of grip everywhere and even a slight tail waggle can be induced under duress. Sadly though, that electronic power steering does nothing for the real dynamics. It’s good, just numb, and if I’m being honest, it reminded me of time sat at home in front of the Playstation 3. Still, having said that, I was having epic levels of fun and the steering wasn’t ruining it. Chink avoided.

What of the stoppers and that eight-speed cog box? Not once did we suffer the historical fade that hampered the outgoing (and weighty) Sport when pushing to the limit, the pedal instead offering bags of feel and renewed confidence with each left hander. Even with a severe beating dolled later in the day. The ZF box meanwhile was similarly superb as you would expect from the German maestros. I understand the inclusion of a new eight-speed gearbox in the ever-growing fight for greener motoring, but I’m not sure a sporty SUV really needs that many.  In fact with all those 461lb ft of torque to hand, four was plenty.

Roughly two hours of open flowing roads later, we arrive at Eastnor Castle for a quick nicotine injection and a couple of coffees before making a beeline for the mucky stuff. Without changing any settings or components at all on the Sport. Here we would experience the reason why Land Rover chose to compromise on set-up – those All-Terrain tyres again proving the culprits – to create the ultimate performer in every circumstance. 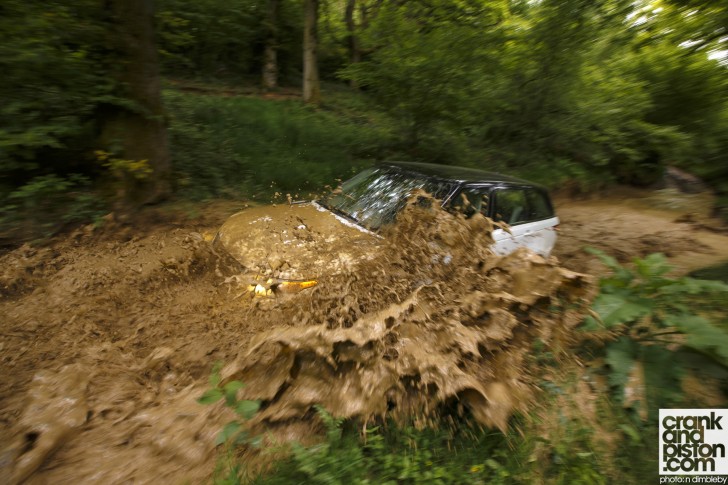 Stuart Frith, chief programme engineer for Range Rover Sport and proper chap was keen to point out that “Land Rover’s Terrain Response 2 enables even non-expert drivers to benefit from the system’s full capabilities”, confident that the vehicle is “automatically configured in the best possible way for each moment of their trip”. However tough the conditions, the Range Rover Sport will apparently be ready to tackle the journey. I’m pleased to hear that, especially when we start making our way round the drops and rises of the course laid out. I needn’t have worried.

Land Rover has clearly nailed the all-new Range Rover Sport, even if there are a couple of gripes. I’m not totally sold on the rear styling, there are a couple of bits on the inside that I felt let the side down and the industry drive towards electronic power steering has left the car endowed with a slightly numb control centre. But like I say, these are just niggles.

Not once did the Sport feel out of its depth. Not once did we struggle, bottom out or get stuck. Yes, I’m sure there are certain products out there that would happily undertake this challenge. But could they also strike gold on gravel off-track, hunt down motorbikes across Welsh roads, and go full time hardcore off-road? I doubt it.