Exciting times ahead. Honda is set to unveil the all-new Civic hatchback prototype at this year’s Geneva Motor Show. 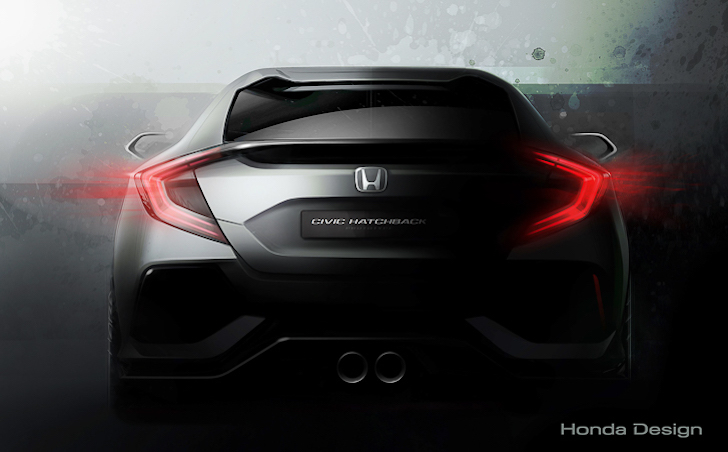 Honda will unveil an all-new Civic design study at this year’s Geneva Motor Show, a production-ready version of which is set to drop early next year.

Similar in shape to the Civic Coupe launched last year, the most notable features of the design include some sweeping taillights and a sporty, low-slung roofline. Perhaps the most distinctive though are the enormous vent-like apertures in the rear bumper that bookend some centre-mounted dual-exhausts. It’s a sporty design, indicative of both the newly released Civic Type-R that’s been making waves as of late and the Mugen-inspired model, though details are being kept thoroughly under wraps until Geneva.

When it hits the showroom in 2017, the Mk10 Civic will be powered by either a 127bhp 1-litre three-cylinder or a 201bhp 1.5-litre four-cylinder, both of which are direct injection VTEC turbo powerplants that replace the current naturally aspirated 1.8-litre unit. Each is likely to be mated with either a six-speed manual or a CVT.

Alongside the new Civic prototype in Geneva, Honda will also unveil the new ‘Keenlight’ Jazz concept – which highlights customisation options for the company’s smallest hatchback – and the ‘adventure themed’ CRF1000L Africa Twin, as well as the new NSX. Doors open at the 2016 Geneva Motor Show on March 1.