Jeep has given the Grand Cherokee a refresh for 2014. And we’ve had a go in it.

It doesn’t seem five minutes since Jeep first introduced the Grand Cherokee – an SUV that, as its name suggested, stood above the Cherokee in terms of size and price. But it was 21 years ago, and since then Jeep has sold 4.8 million of them. Which means a new one is a big deal for the SUV-loving public in the Middle East.

With global Jeep sales up more than 100 percent in the past year, according to Middle East boss Jack Rodencal, the self-described number one SUV brand in the world is on a roll. Its sales in the Middle East have doubled since 2010, largely thanks to the introduction of new products that the public are snapping up.

Jeep isn’t resting on its laurels though. Three years after it was first introduced, the latest generation Grand Cherokee has been given a spruce up for the 2014 model year, with a facelift, some under-the-surface tweaks and a new top-of-the-range model non-SRT model called the Summit.

So what’s new? Well, the looks. The front ends has been sharpened up and, to this reviewer’s eyes, looks smarter and more purposeful than ever while still retaining the signature Jeep grille. At the back, the rear lights have been smoothed out and look less like those of a BMW X5, although they now have a hint of Volkswagen Touareg about them. All in all though, the Grand Cherokee is right up there with the best looking cars in its class.

Things have been tweaked inside. Each new Jeep of late brings a step up in interior quality from the frankly dismal offerings of a few years ago, and the new Grand Cherokee is definitely on the right track. There are still a few disappointing areas – most notably the brittle, scratchy plastic on the centre console – but overall, in the test cars we drove on the local launch, there are plenty of solid, soft touch surfaces to keep things classy. Jeep has also updated the available tech, with the infotainment system operated via a big 8.4-inch touchscreen and information displayed on the dashboard through a 7-inch TFT screen between the main dials.

Under the surface, there’s a new gearbox in all models, an eight-speed automatic making its first appearance in a Jeep. And about time too – gone are the V6’s five-speed and the six-speed found in the V8. The engines themselves remain however – a 3.6-litre V6 with 290bhp or a 5.7-litre V8 with 360bhp are available in all trim levels. That’s not a lot of power-per-litre, but in the land where fuel is cheap, it’s not a major concern. Performance therefore isn’t stellar, but in the V8 it suits the needs of the type of vehicle. Particularly in the V8, the Grand Cherokee is hauled forward at a decent pace on the road, with a great HEMI soundtrack emanating from the exhausts. We’re looking forward to trying the SRT8 version, which is on the way. For now though, you can expect adequate, comfortable performance without too much straining of the engine. Don’t expect to smoke people off the lights though.

The launch event didn’t afford the opportunity for much on-road driving, consisting as it did of a convoy to the desert for some off-road antics. I can tell you that it’s got a nice floaty ride thanks to the air suspension, nicely hefted steering and not too much body roll around the corners considering its height, but that’s about it for now.

Off-road, the Grand Cherokee is a capable as you’d hope for. Equipment-wise, it matches most features that its rivals can throw at it, such as different terrain settings for different surfaces, and a cool new hill ascent control system that works in the same manner as hill descent control, but will take you uphill as well, carefully monitoring traction and adjusting power and torque to each wheel accordingly. A thrash around the dunes for an hour found little that the Jeep couldn’t cope with, although it should be noted that all the test cars had their front bumpers removed before we went to get sandy. That’s not something you have to do in rival cars, and the Grand Cherokee’s looks suffer considerably as a result.

Still, with prices starting from $39,179 and rising to $56,604 for the Summit, it offers a lot of all-round ability for the money. There are SUVs that are better than the Grand Cherokee on-road, and some that are more practical off-road. But there aren’t many that offer this sort of style, comfort and competence for the price. 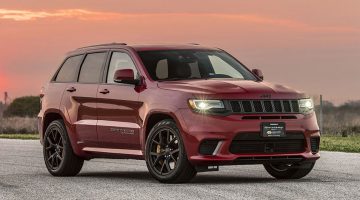 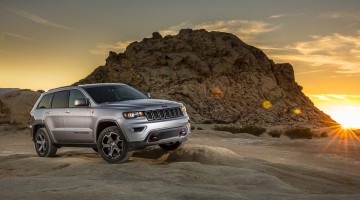