crankandpiston.com grabs a few words with Marussia F1 Team driver Max Chilton to discuss life as a Formula 1 rookie, why qualifying is the chink in his armour, why an early career in touring cars was the right way to go, and that elusive first championship crown.

Having already heard a rather knackered Jules Bianchi offer a sleepy hello at the Marussia F1 Team press conference, by contrast British teammate Max Chilton couldn’t be more jovial, entering the room as he does with a smile, a cheery “hello everyone” and the most impeccable hairstyle I think I’ve ever seen.

It’s no real surprise Max is in a good mood, given the consistency his rookie Formula 1 campaign has enjoyed. He is the only driver on the grid for instance to have finished every Grand Prix this year, his pace relative to that of Bianchi has improved considerably throughout the season, and the rumour mill has sounded that Force India as well as Marussia are both after his services next year. Elder brother Tom, RML driver in the World Touring Car Championship, must be wondering what he’s missing

Having managed to grab a few minutes with Max, crankandpiston.com is keen to hear his thoughts on both the future ahead and his career hitherto. But first… 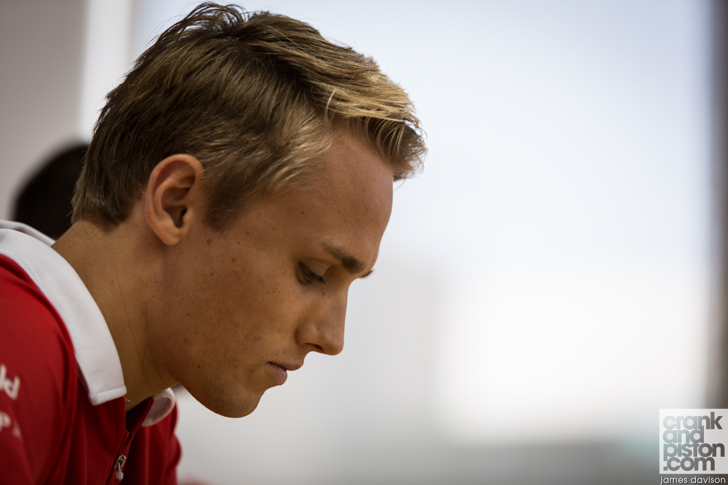 Max, first things first: how jealous is Tom that his little brother is racing in Formula 1?!

He’s probably a bit jealous! Tom’s never driven a single seater before so I’d like to get him in one at some point just so he can experience what I go through. But he’s won races in Le Mans LMP1 cars, which are pretty fast and have more downforce than a Formula 1 car. They’ve got more power and carbon brakes, so he’s used to what I go through most days but not exactly at the same level. Plus he’s busy at the moment racing touring cars and trying to become vice champion in the WTCC, so it’s not it’s like he hasn’t got anything to concentrate on.

Speaking of touring cars, you yourself dabbled in tin tops in the early part of your career I believe…

Yeah I took a rather abnormal route to the top. I started off in go-karts as 90 per cent of F1 drivers do, but when most people leave karts and their main goal is to become an F1 driver, they usually go straight into single seaters. At that age I couldn’t have raced a single seater as I started with cars when I was quite young, so I went into T-Cars, which is a junior touring car series. I really enjoyed it, and learnt what it was like to race a proper car before moving into single seaters. So it was an unusual route, but it seems to have paid off. 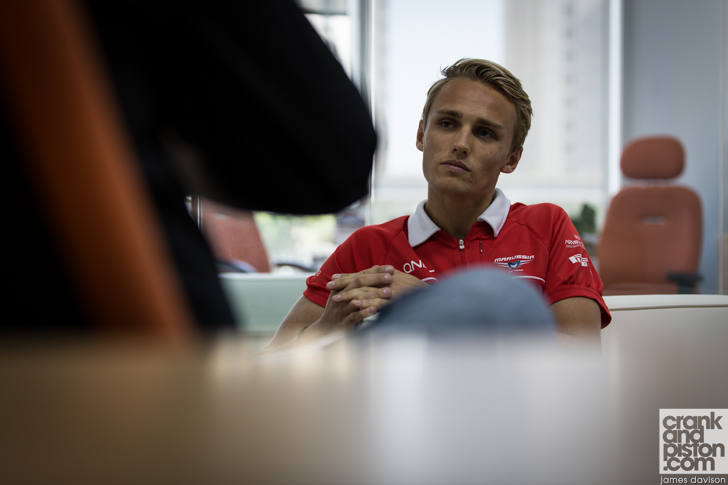 But you decided against the more conventional Formula Ford or Formula Renault 2.0 categories and instead went straight into British Formula 3 against Sergio Perez, Leo and Greg Mansell (sons of former F1 champion Nigel), and later Jaime Alguersuari, Daniel Ricciardo and even Joe Ghanem. A tough arena to learn your single seater trade…

It was. I started testing an F3 car when I was only 15 [Max was given special dispensation to start his first F3 race despite being under-age]. It was a big jump, but I’ve always thought you’re better off racing in a category above and against the best rather than stay another year in a junior category and winning it. I think I may have done better in certain championships if I’d stayed another year but I wouldn’t have learnt any more.

That might explain your rookie GP2 season at 18 years old against Pastor Maldonado, Romain Grosjean and Charles Pic…

I’ve always made the jump whilst I was quite young: my jump to GP2 was quite young, and my jump to Formula 1 was quite young! But it’s working, and I wouldn’t say I’m out of my depth. I’m getting the results. I’m the only driver this year to finish every Grand Prix, so it’s going really well. 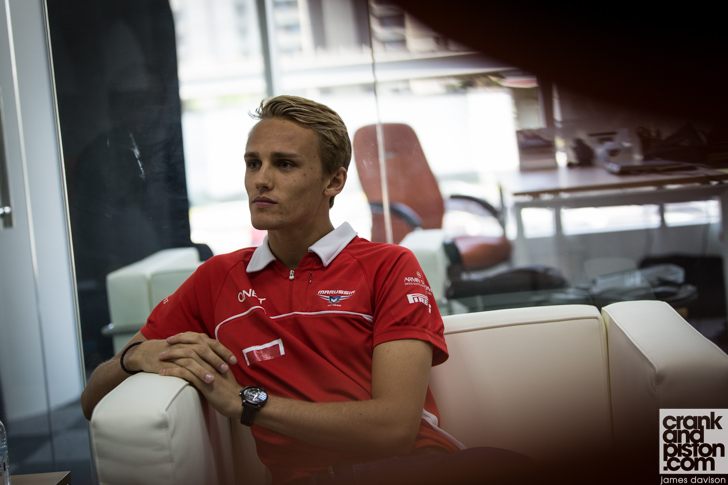 Yeah I’d like to think so. I normally stay in a category for three years: the first is learning the ropes; in the second the pace is there but there’s still something missing; and in the last year – in British F3 and GP2 – I’m suddenly getting pole positions and race victories and finishing fourth in the championship. So I think continuity is key, and that’s why I’d love to be at Marussia again next year, since I think I’ve got a lot more to show. I mean, most championships are only ten to twelve rounds long whereas F1 is 19. And I think that the second half of this year is almost like my second year in Formula 1 since my pace is getting a lot stronger.

With in-season testing so limited and the gap from the front to the tailenders so significant, how difficult is it for a rookie to make his mark? Lewis Hamilton’s remarkable debut season with McLaren in 2007 must have made life harder for aspiring British racers…

Actually I’ve never had it compared because it’s a completely different scenario. Y’know, the McLaren was a class winning car. For sure, In Lewis’ first season he won races and nearly won the championship which is outstanding. But it’s hard to compare when the best we can really do if everyone finishes is maybe 19th. And that’s the thing. A lot of the rookies this year have come from winning races and championships to running in a mid-field car and changing their goals. If you go out aiming to win the race under these circumstances, it’s not going to happen so you have to set your own goals. 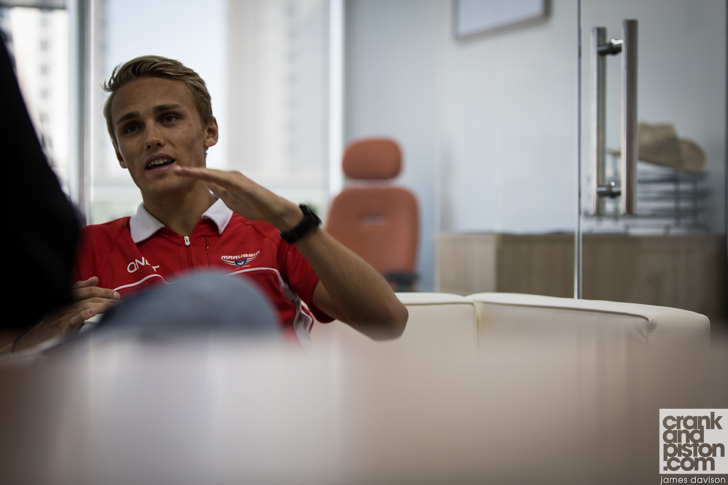 Having set your own goals, is there anywhere you feel your driving needs improvement?

Next year the sport changes once again, with 2.4-litre V8 engines being ditched for 1.6-litre turbocharged V6s. As well as learning the ropes, how difficult is it for a young driver to adapt to new technical regulations?

For sure it’s been a bigger jump than I thought it would be this year, and it’s taken me a little longer than I expected to get used to it. But I think that’s partly to do with the car we’re in. We spend a lot of time getting the car balanced and then we focus on our driving. But next year will be a huge chance for rookies. Whenever they’ve done big rule changes in the past, it stirs the competition up a lot. If we gets some things right and the top teams get other things slightly wrong, then we could have a really strong start to the season next year. I can’t wait for that, and hopefully I’ll have the opportunity to race next year. 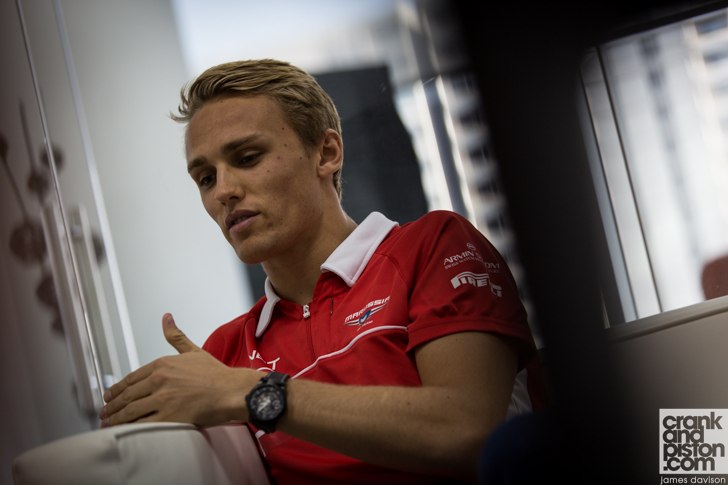 Of course your teammate Jules Bianchi has already signed up for Marussia next year. He was a late addition to the team. Did that affect your pre-season preparation?

Not really. It kind of helped actually! I got more winter testing because there was nobody else in the other car. But also I was doing a lot of miles and didn’t have anybody to compare that to. So I’d be out there thinking maybe I was on the limit, but until you have another driver to compare yourself to, it’s almost impossible to know that. Hopefully that will be different at the start of next season.

Looking ahead, we have the Abu Dhabi Grand Prix this weekend. You’re one of the few drivers on the grid who competed in the short-lived GP2 Asia Series, so you’re pretty familiar with the Yas Marina Circuit…

Yeah, I love the track. Some drivers don’t like it, but I really do. The first sector is high speed, the second has got two straights and two slow speed corners which helps overtaking, and the last is like a street circuit. Put that all together and I think you’ve got a really great track. 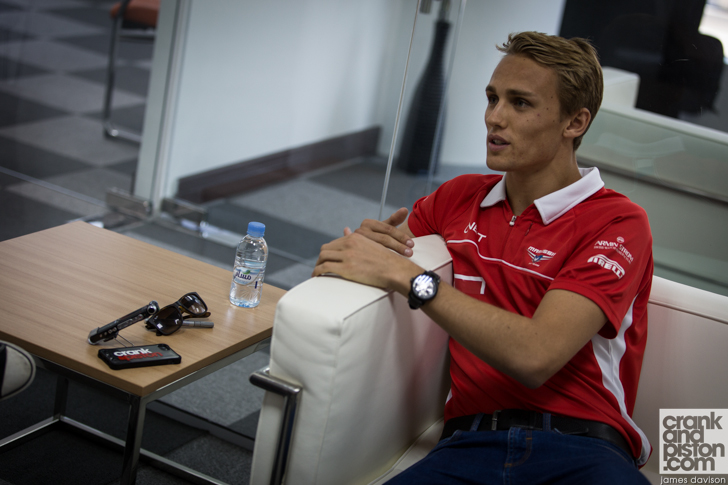 So we have touring cars, British Formula 3, GP2 and now Formula 1. But there’s one thing missing: a championship. How much would it mean to you to secure your first championship crown and in Formula 1 to boot?

It would mean everything. It’s my goal; it’s my dream. As I mentioned earlier I think I might have become a champion if I hadn’t jumped up as early as I did. But at the end of the day it’s not always about being the champion. You don’t always have to win to show your quality. But I would love to call myself a Formula 1 winner one day.

– Our thanks to Marussia F1 Team and QNET