50 Years of the Ford Mustang

2014 marks 50 years since the introduction of one of the world’s most iconic cars. With the 10th generation of Mustang on its way, let’s have a look back at some of the great – and not so great – models that preceded it.

The year is 1964. The Beatles have just released their first album in the US and become superstars. A young boxer called Cassius Clay has beaten Sonny Liston to become world heavyweight champion. Jack Ruby has been found guilty of shooting JFK’s assassin, Lee Harvey Oswald.

In the midst of some iconic events, at the prestigious World’s Fair in New York, Ford unveils its latest model – a four-seat pony car named after a horse. The Mustang is born, and having been teased by two years of build up, people instantly go nuts for it. It’s featured in a Bond film (Goldfinger), and some 22,000 are sold on the first day alone, despite being launched in the middle of the year, which was unusual at the time. 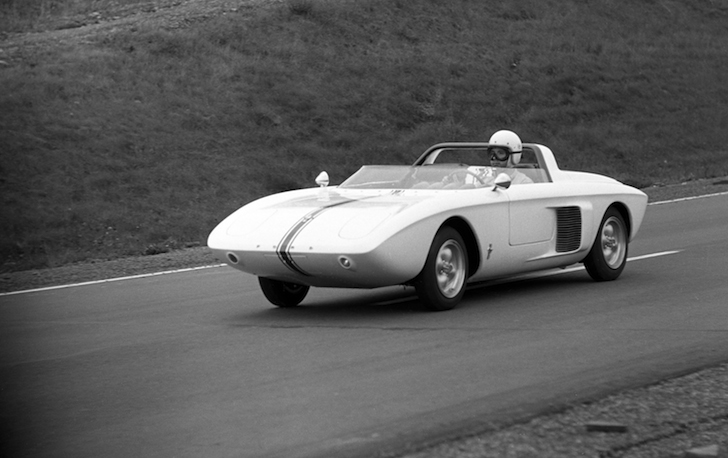 Costing just $2,368, the Mustang was the culmination of several years work by Ford’s general manager Lee Iococca and his design team. The ’64 Mustang changed considerably from its early origins, as it was originally conceived as an open-top two-seater sports car. A 1962 concept, called the Mustang I, was built as a reply to Chevrolet’s Corvair Monza. The car debuted at the United States Grand Prix at Watkins Glen, when F1 racer Dan Gurney took it out for demonstration laps that were almost as fast as the race cars in the main event. 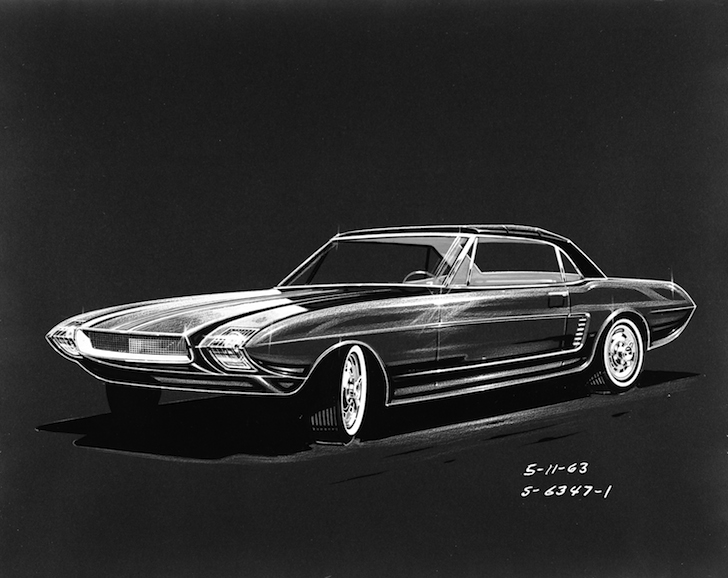 For two years, the Mustang I did the rounds at motor shows, but it soon became clear that it had limited appeal to the wider public. There followed a Mustang II concept in 1963, which featured four seats and paved the way for the production car the following year – it used a pre-production Mustang body but used some styling cues from the original concept to act as a bridge between the two. 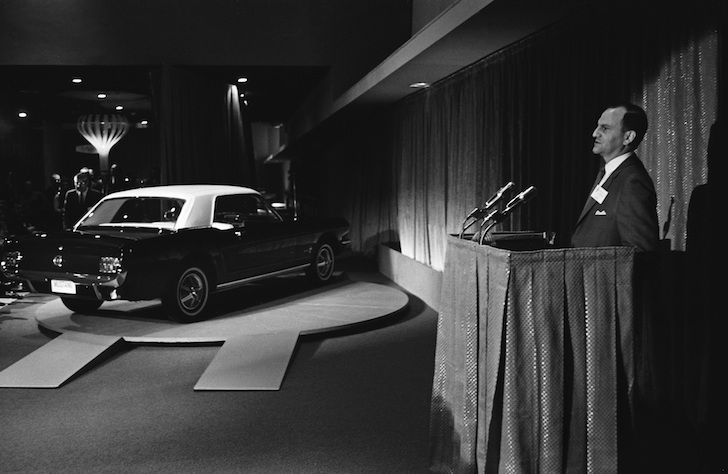 And so the finished article made its first appearance, with both hardtop and convertible versions on sale from launch, with a choice of straight six or V8 engines (the V8s proved much more popular). When Lee Iococca, the Ford general manager, introduced the finished Mustang to the world in New York, he outlined the massive interest, and the high hopes Ford had for the car. “We don’t claim the Mustang… can be all things to all people,” he said. “But we do believe it will be more things to more people than any other automobile on the road.”

In 1965, during its first full year on sale, the Mustang sold 559,451 units in America alone, catching even Ford by surprise as it raced to improve production capacity. The 2+2 fastback model was added, as was a GT model that included front disc brakes to replace the standard drums. 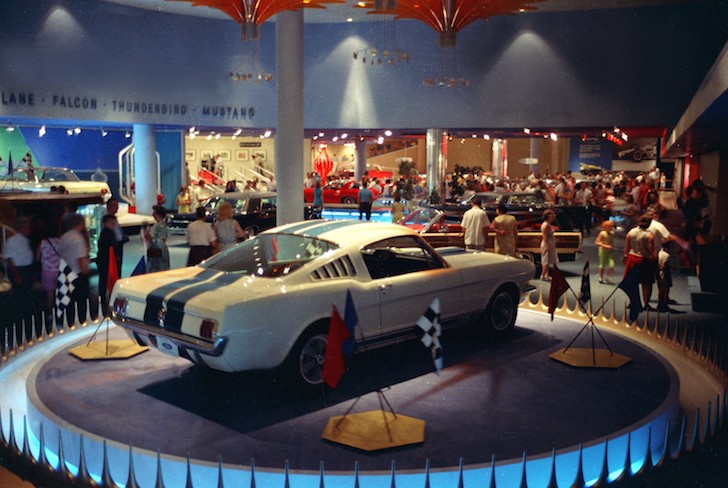 But while the public loved the Mustang on the road, on the track General Motors was getting all the attention, chiefly with the Corvette. Ford looked for an answer, and found it in the form of a racing driver called Carroll Shelby. The Texan was convinced that the Mustang could get the better of the Corvette, and he set up an operation in Los Angeles to turn 100 of the new 2+2 models into world beaters. Out went the rear seats and in came bigger brakes, lowered suspension. Thus emerged the Shelby Mustangs, performance machines that go beyond the standard stallion to this day.

The popularity of the Mustang continued to grow – it sold even more cars in 1966 than it did in ’65, but by now Ford’s rivals were jumping on the bandwagon, and doing so very well. Chevrolet had the Camaro, Plymouth had honed the Barracuda and Pontiac had the Firebird. So just three years after it was first introduced, the Mustang evolved into an all-new second generation model. 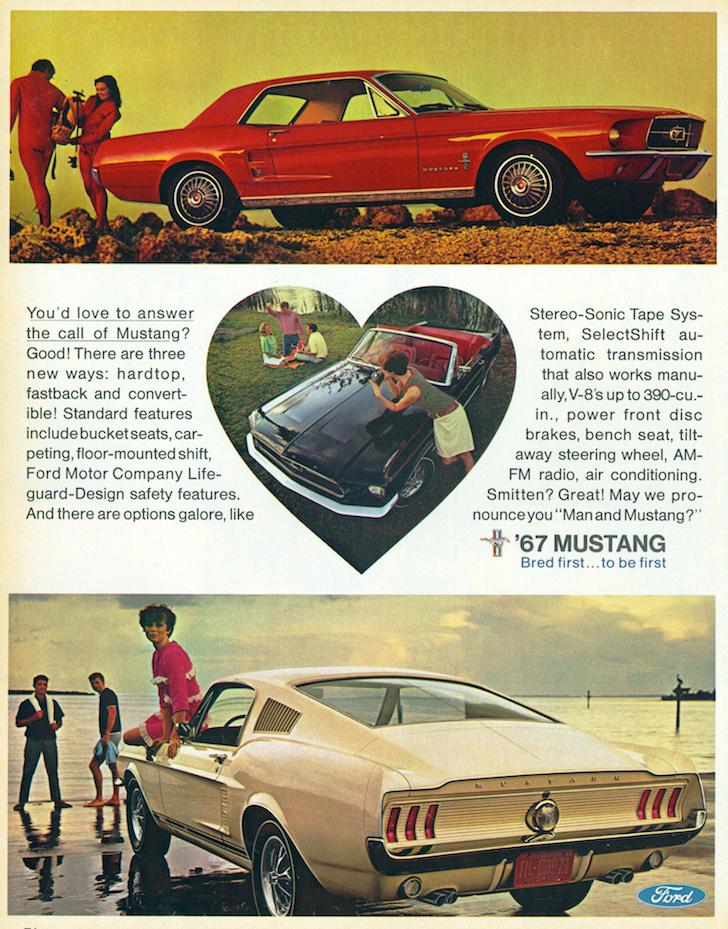 Well, not quite all new. The chassis underneath everything remained much the same in the 1967 Mustang, but the body was bigger, the track wider and all the details of the first model were developed, giving it a meaner, sportier look. It was also nicer inside. A new top-end engine was introduced too, a 6.4-litre V8 with 315bhp – the previous most powerful Mustang, outside of Shelby offerings, produced ‘just’ 271. Even with all the new competition, Ford still shifted almost 500,000 in the US during 1967. Its popularity wasn’t at all dented by its iconic appearance in the Steve McQueen film Bullitt in 1968.

There was no resting on the laurels though. Just two years later, in 1969, the third generation model was launched. Larger again, it had a new look, with four front headlights and a revised grille. Rather than tweaking the existing Mustang look, Ford finally introduced something new. More powertrain options were available too, with the top-of-the-line Super Cobra Jet V8 pushing our 360bhp. 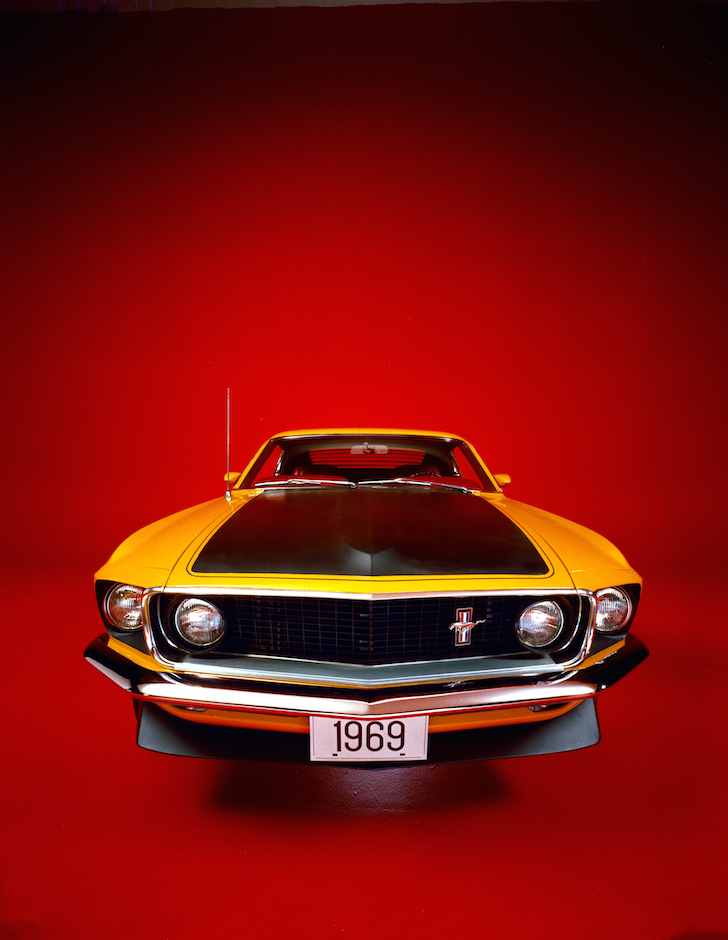 1969 also saw the introduction of a Mustang line second in fame only perhaps to the Shelbys – the Boss range. These came from racing requirements – Chevrolet were kicking ass on the track with the Camaro Z28, and Ford’s response was the Boss 302 Mustang. It had revised suspension, tweaked visuals courtesy of Larry Shinoda and a 290bhp V8. In addition, NASCAR requirements saw the creation of the Boss 429 to house a massive 7-litre V8 that, in theory, produced 375bhp, but in practice was closer to 500. Ford wanted the engine to go in the racing Torino, but decided to homologate it in the Mustang. And why the hell not. 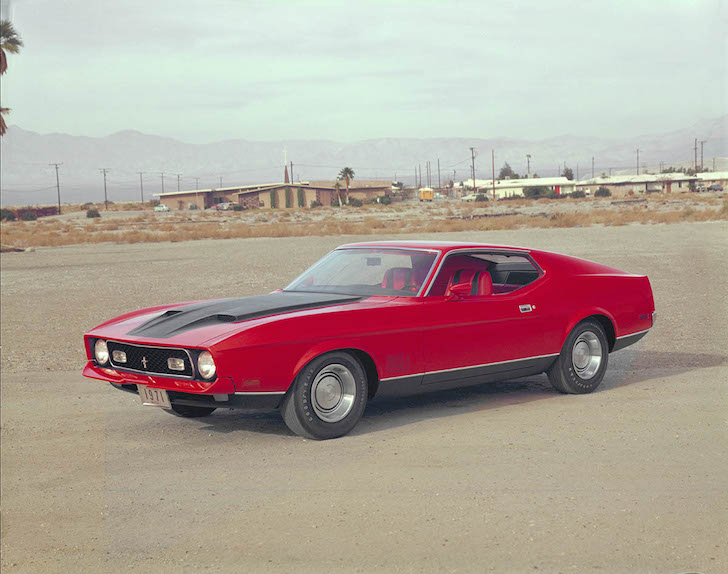 Serious emissions regulations came into force as the 1970s dragged on, and that started to impact on horsepower. A few years earlier you could get (unofficially) some 500bhp out of a Mustang from the showroom, but by 1973 the high output V8s were castrated, barely pushing out just 150bhp. The straight six had just 88 coughing, sickly donkeys under its hood. Somehow, sales increased, but it was clear drastic action needed to be taken. 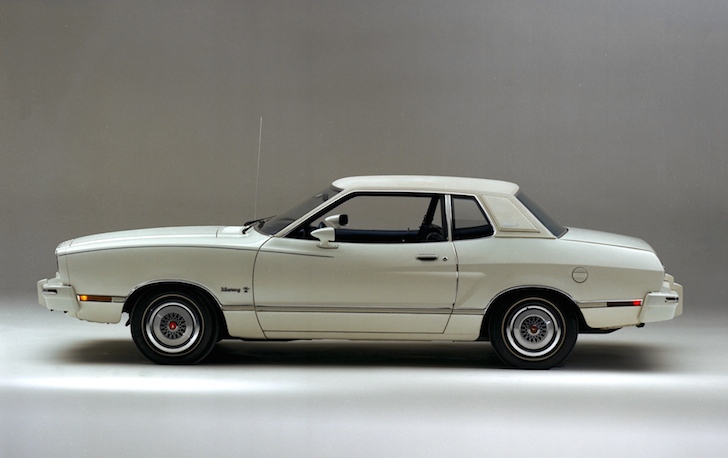 That change came in 1974, with the arrival of the fifth-generation Mustang, known as the Mustang II (not to be confused with the concept car of the same name. After 10 years, the underpinnings of the first Mustang – themselves taken from the Ford Falcon – were cast away, and in their place was thrown the chassis from the compact Pinto. The result was a considerably smaller Mustang, which brought back some of the styling of the ’64 original, including the scalloped flanks.

But it wasn’t particularly great. For the first time, the Mustang had no V8. At the lower end of the range was a four-cylinder engine – not the awesome kind of today, but the terrible, weedy kind of the 1970s. It had 88bhp, and if that wasn’t enough for you, your only other choice was a 2.8-litre V6 with 105bhp. Like, wow. 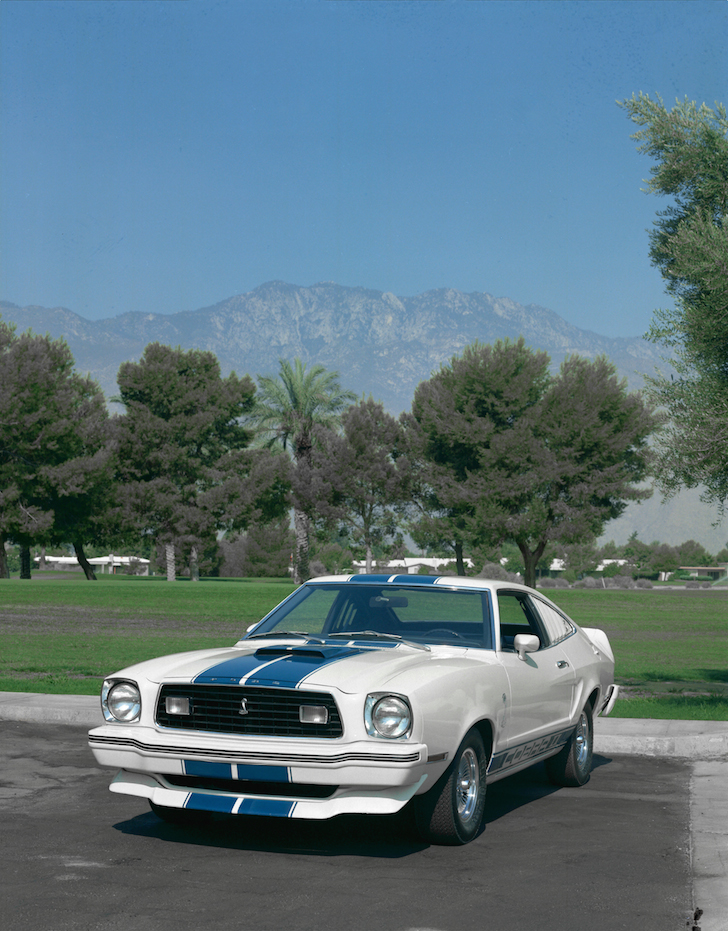 And yet, despite being fairly rubbish, the Mustang II was a massive hit at launch. Customers, stung by the 1973 oil crisis and clamouring for anything that was more fuel efficient, bought almost 400,000 of them in its first year on sale. But within a year, sales had halved, prompting cosmetic attempts to woo customers. Fake bonnet vents, spoilers and stripes actually had a decent impact on sales, particularly thank to the Cobra II’s appearance in Charlie’s Angels and despite the fact that it didn’t have any extra performance. Sales still fell in ‘76, but only fractionally. The following year, against the backdrop of more power curtailing, they dropped by almost 20 percent. 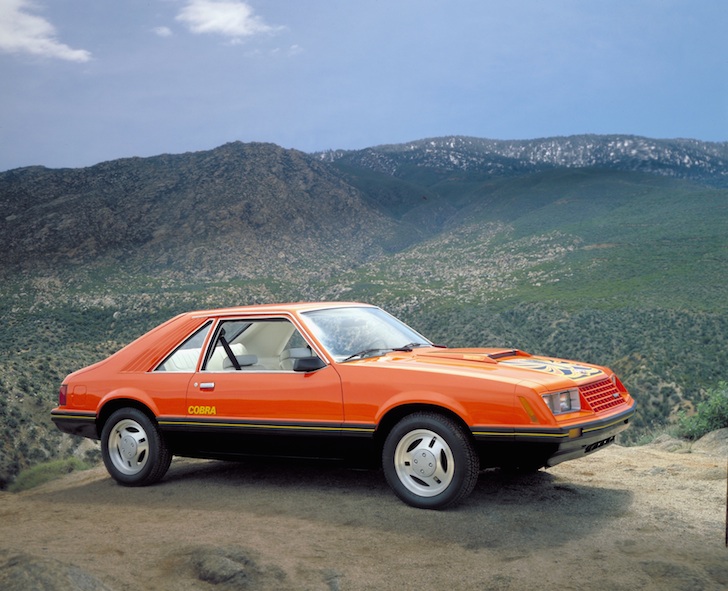 In 1979 appeared the sixth-generation Mustang. It was built on another new platform – or rather, not the Pinto platform. It took instead the foundations of the Fairmont, known as the Fox platform. This meant a major change in suspension for the new Mustang, and an increase in wheelbase over the outgoing model. But the biggest change was in the styling. The new car was more angular, a huge departure from the previous models that derived their look at least in part from the original car. It was, essentially, a Mustang in name only.

However, that didn’t stop it from doing incredible well. Power options were improved, with the top V8 making 140bhp, and the public lapped it up, buying 370,000 in its first year.

That didn’t make it particularly good though, and things didn’t get better as the new decade rolled around. In 1980 the big 5-litre V8 option was axed, leaving an asthmatic 4.2 V8 as the only eight-cylinder option, and it made just 119bhp. This meant that the turbocharged four-cylinder engine was the most powerful in the range with 140bhp, but it was about as reliable as Middle Eastern appointment time.

Continues on next page >>

Previous ArticleBMW 325i. Family reunion. Journals
Next Article Why The Nürburgring is legendary. Die Nordschleife.