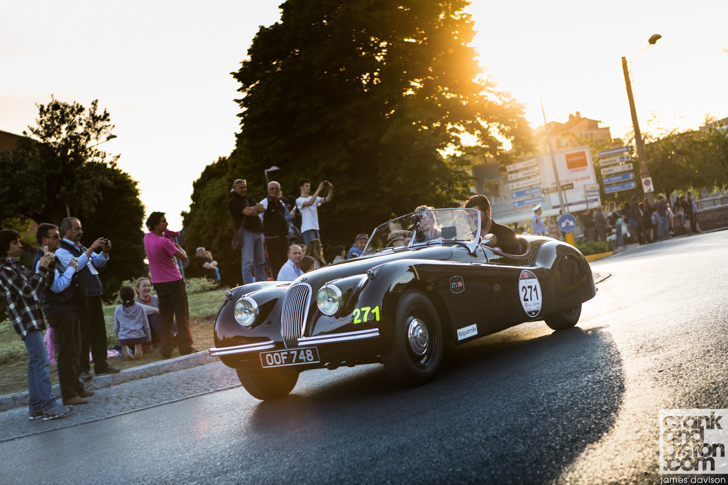 I spent an exceptional amount of time behind the wheel of F-TYPE roadsters last year. It was the car that proved Jaguar was back in the game and the first true sportscar from the marque in decades to wear both Growler and Leaper with pride. Since the release of the coupé I have been trying to wangle myself a drive and that time had finally come. And yet, with a slight reluctance, I hand over the keys to my co-driver as I am also tasked with photography procurement during the four days. Damn it! 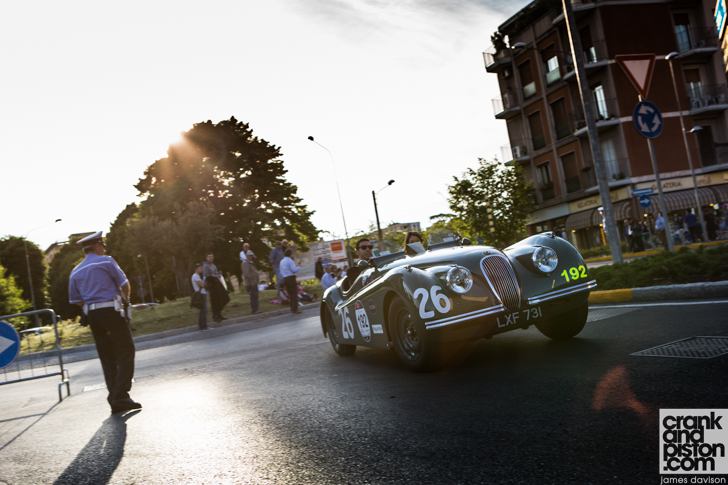 Okay, so it isn’t all bad news. My co-driver is Richard Agnew (AKA Ragnew) and he knows how to hustle an F-TYPE. And so he should as he owns one. And is also the Global PR Director for Jaguar. The going is slow however on the road that leads out of Brescia with a only a few random crowd pleasing blips of speed when the opportunity arises. Taking a shortcut to chase the Jaguar entries, the road in front opens and Ragnew is on a mission. It isn’t long before we become the Two Gentleman of Verona in a speeding F-TYPE but we still haven’t managed to catch up with the Heritage cars. Following the route at a rapid pace, cutting out the regularity trials and making great time we reach Padova with the fuel warning light flashing and a mere 12km range remaining in the tank. 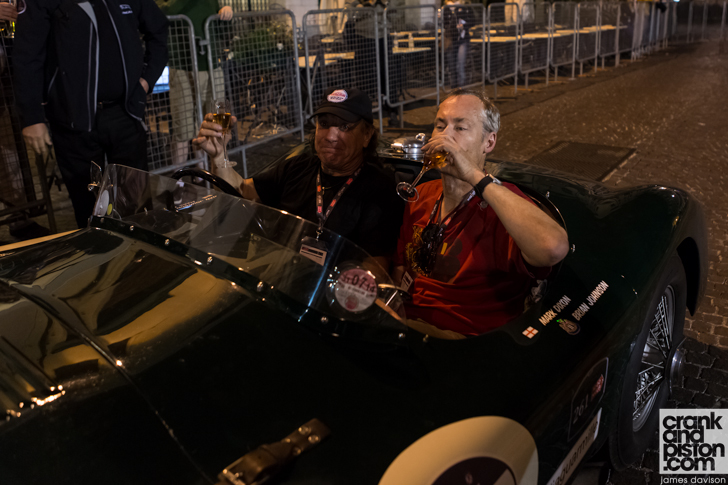 A quick dash on foot to the finish line in Padova and, yes, we made it on time to greet many of the Jaguar Heritage Racing team. While the first cars (who had left Brescia beginning at 18:00) had made it to Padova shortly after 23:00, it was many hours before the later runners completed day one. Time for everyone to get a few hours snooze before the 07:00 start in the morning as tomorrow would be the longest stage of this year’s Mille Miglia. Destination Rome. 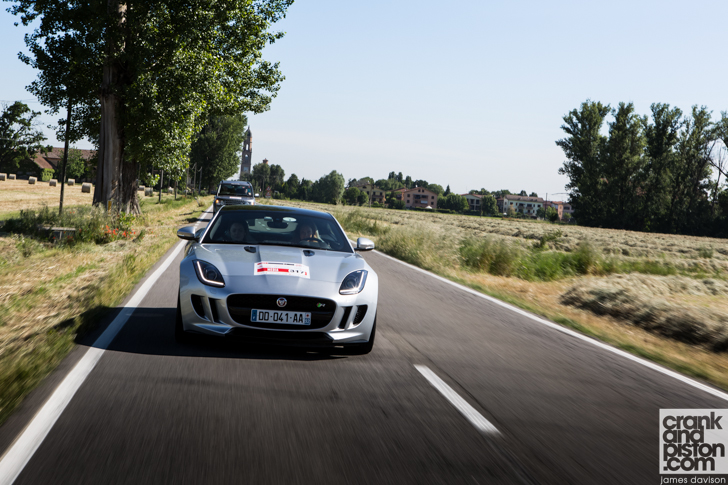 Morning came much too early but it wasn’t long before we were back in the chase. I would be sharing the F-TYPE R Coupé with a German author and journalist who surprisingly asked if I would like first drive. But my first blast in Jaguar’s coupé ended up being nothing but frustration. From Padova and south through Ferrara and Ravenna the route took us along industrial areas and towns heavy with traffic. Leapfrogging to get ahead (while giving way to the competing historic race cars behind) requires 100 percent concentration with very little driving enjoyment. It is a seesaw motion of hard on the accelerator, hard on the brakes and then once again when the way forward presents a gap. Repeated about a million times. For hours. With only a few open sections allowing me to stretch the legs of the growling V8. By the time we reached our lunch break, in the Republic of San Marino, I was feeling less than serene within the beautiful surroundings of the enclaved microstate. 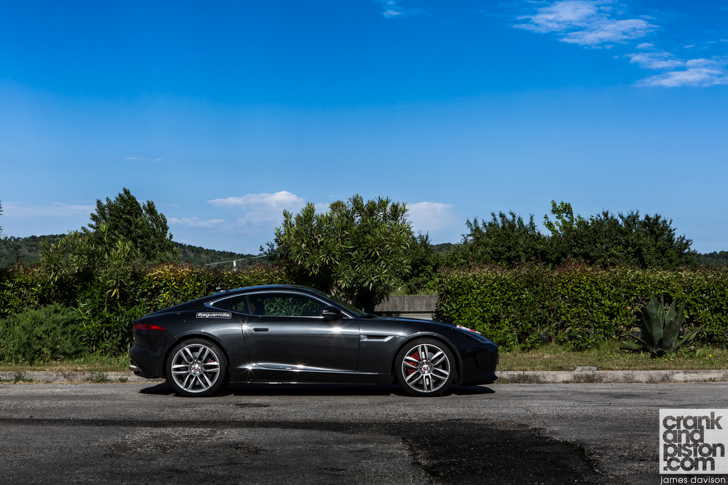 It’s funny how a simple sandwich and a much needed caffeine injection can suddenly alter the direction of the universe in your favour. Feeling a little refreshed, nutrition consumed and perked up with a coffee, positivity slowly returns.  My co-driver was feeling a little tired and not confident about his driving skill and asked if I would mind driving again. Back behind the wheel of the F-TYPE R Coupé and heading out of San Marino, we arrive on possibly one of the best squiggles on an Italian map I have ever driven. The Mille Miglia is not about modern cars like the F-TYPE. But this stage, down through Pesaro, Ancona and Loreto, winding its way across beautiful rolling Italian countryside, offered some of the most challenging and rewarding drive time I have experienced in Europe. The F-TYPE’s agility and pace breeding confidence in attacking hairpin after hairpin and producing a smile that may permanently crease my face. The thought does cross my mind, however, how different, how glorious it would be to be racing in an open-top Heritage car. In the Mille Miglia. On these very same roads. 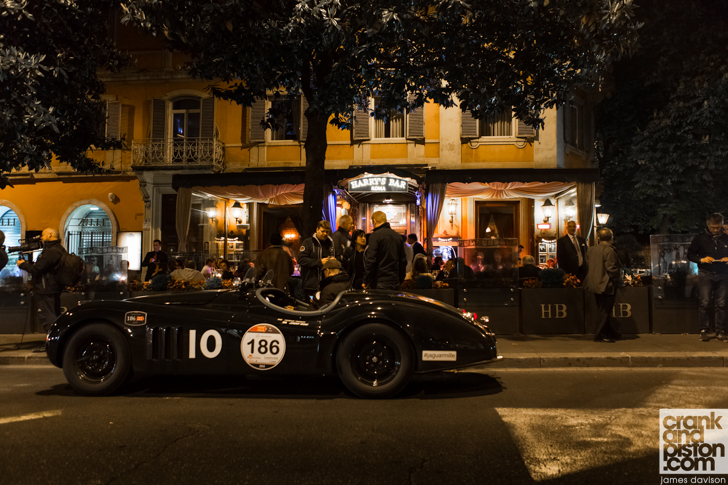 All good squiggles must come to an end and this one is no different. The geography has started to change, we are entering small towns and villages and the traffic has once again started to build up. The final leg is filled with regularity time trials and the decision is made to hit the autostrade and sprint our way to Rome. Traffic in the capital is not as bad as feared and we make it to our hotel without much fuss thanks to a pre-programmed route on the sat nav. With 15 hours driving behind us today we adjourn to Harry’s Bar to watch the arrival of the historic cars. But after a couple of hours and only a few cars coming through we are informed that the Polizia have altered the route. It’s with very little regret that the decision is made to go to bed.