What you’re looking at here is one of the most exclusive models currently on Chevrolet’s fleet in the Middle East. Forget your Camaro ZL1 and even your Corvette C7, you’re far less likely to see a Chevrolet Trax than either of these 400+hp sportscars.

The new Chevrolet Trax is currently only available in the United Arab Emirates and Lebanon, and is part of an initiative by Chevrolet to increase its presence in the fast-growing small SUV segment in both regions. And why not? Back in 1935, the launch of the Suburban Carryall got the SUV concept rolling, an automotive genre in which today, some 79 years later, Chevy remains amongst the most respected of names.

With the crossover SUV Trax though, Chevy has a different approach.

Rather than the traditional hold-all, carry-all, and cram-all purpose of its larger models, Chevrolet’s new-for-2014 Trax crossover SUV has been designed to offer everyday commuter civility in a small fuel-efficient package, albeit a versatile one capable of handling itself off the beaten track. For Chevrolet, the Trax proves an ideal option what it calls ‘urban adventure seekers. Where better then to take our ‘exclusive model’ than for an extended drive through the mountains before taking in the sights and night-scape sounds back in Dubai?

You join us almost 1000m above sea level, deep in the mountain range twixt Dubai and Fujairah, a (hearty) stone’s throw from Dibba. Though the temperature has tipped the high 40s, low hanging clouds and the current altitude mean it’s a good 10-15 degrees cooler than it had been when we set off on our ‘urban adventure’. Combining that with kilometre after kilometre of rocky canyons and uninhabitable mountainsides stretching out before us, it’s one of the most stunning views we’ve come across in a long time on crankandpiston.com, though that’s not to say that the Trax doesn’t offer its own aesthetic charm. 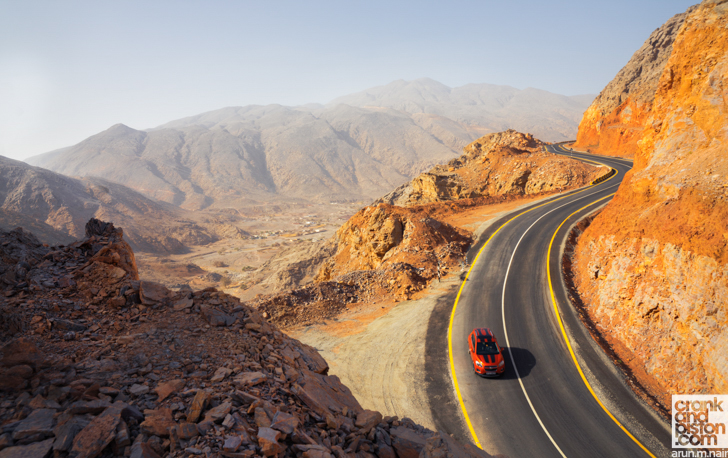 Keen to emphasise both the city-side civility and rugged exploratory nature of its new Trax, Chevrolet has gone for quite a mixed bag with its new crossover SUV. At the front for example, Chevy offers what it calls ‘muscularity, athletic agility and movement’, which in laymen’s terms translates as ‘rippled bonnet and aggressive headlights’. Coated as the newboy is in Orange Rock paint – plus go faster stripes – it’s a strong look, giving the crossover SUV some much needed presence. It’s a much softer look across the rest of the bodywork, albeit one offset by some pretty sharp Camaro-esque alloys. And yes, the tyres are about to get a thumping.

Below us is the best part of 10km of winding mountain roads, single track, high grade and off-cambered, and designed to put even the heartiest of constitutions and nerves of steel to the test. Clichéd, yes, but there is an element of truth outside dramatic hyperbole here. On the other side of these (slightly too slim for my liking) yellow barriers is a drop of nearly 1500-ft into the canyon below. Hit the brakes a little too late or overcorrect a slide into a hairpin turn, and we’re in for a ride that would make even Jeremy Foley flinch.

Fortunately Chevrolet has this covered. One of the primary selling and marketing points of the 2014 Trax is its attention to occupant safety. Everything from Hill Start Assist to Electronic Stability Control, Traction Control to four-channel Anti-Lock Brakes (ABS) have been loaded into the crossover SUV by GM’s finest and technologically wisest to produce a car that cakewalked Europe’s hallowed NCAP test. 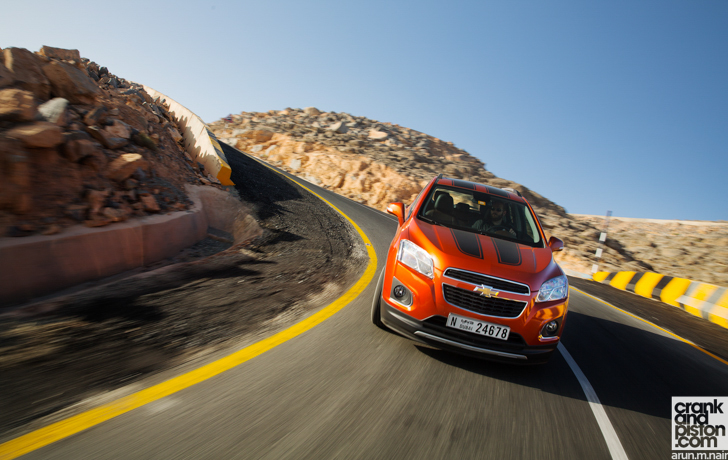 Perhaps even more impressive is the ‘Roll-over Mitigation’: should we get a little overly amorous on the way down, the chassis and bodyshell have been designed to withstand up to four times the vehicle’s 1455kg kerb weight. Not that this is overly likely, the 4.2m long, 1.7m wide and 1.6m high dimensions offering a ‘well-planted, confident stance’. Helpful that.

As our convoy makes its way down the mountainside, sharp left and right hairpin bends prove an excellent test for the 2014 Trax’s Electric Power Steering. There’s rarely any understeer through the ever-tightening turns, nor indeed does bodyroll prove much of an issue, the McPherson struts at the front and compound crank suspension at the rear keeping a confidence-boosting amount of balance at our fingertips. This solid base also allows me to concentrate on putting the 140hp and 129lb ft of torque from Chevy’s 1.8-litre four-cylinder to the test. Available on-demand all-wheel drive allows power to be transferred smoothly to the road surface via the Hydra-Matic six-speed transmission, giving us an interesting insight into one of the segment’s most powerful engines. But on this road, it’s not just about the acceleration, progressive braking through the middle pedal and the Electronic Brake Force Distribution driver assistance system meaning we (fortunately) hit the bottom of the valley without putting the Roll-over Mitigation on the crossover SUV to the test.

Given the scenery on offer, and the endless opportunities therein, our photoshoot of the Chevy has already taken five hours to pull together. It’s a long journey back to Dubai though, and since all of us are interested to see how the Trax’s Orange Rock ‘muscular, athletic agility’ shines under the city’s myriad neon lights, we bag the mountain shoot and begin our journey back to civilisation. 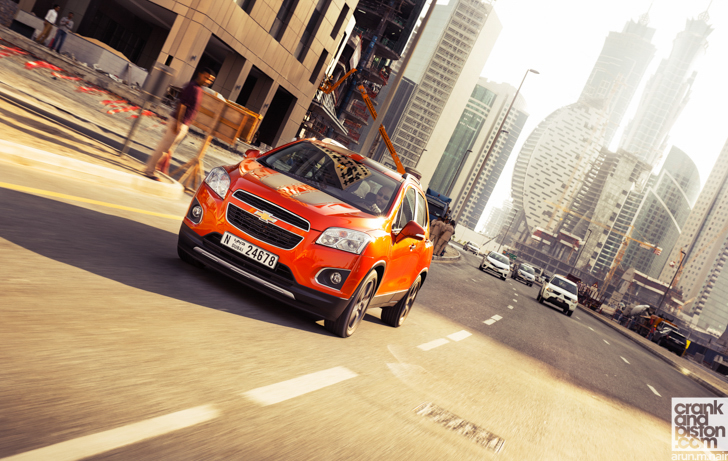 Back on the road and at sea level, the temperature has once again rocketed into the high 40s, though this has not had an undue effect on the climate in the Trax’s cabin. Our LTZ test model for instance is the top trim ($22,500 to the lower spec LT’s $18,200) bringing with it leather seating and a more premium-look centre upholstery: Chevrolet has even been good enough to provide me with an armrest for the 150km highway journey. Just as well the suspension, which had been put to the test on the winding ribbon of tarmac we’ve just conquered, has also been configured to offer a smooth ride.

For entertainment, and with the rest of the crew having set up shop in the supporting GMC Yukon, I have Chevrolet’s new MyLink technology which, thanks to increased connectivity and a ‘streaming audio powerhouse’, gives me access to up to 70,000 radio international radio stations via touchscreen. Alternatively, USB connectivity means the…ahem…questionable music on my iPod is available on back-up, as would five other iPhones should I wish to pair them with the Chevy system simultaneously. Thanks to Eyes Free mode, which enables drivers to interact with their iPhones via voice command, I’m able to ask the guys in the Yukon if they want to pull over for a quick sandwich at the service station without taking my hands off the wheel.

It’s another two hours before we finally get back into Dubai, but the sights of the blue neon lights of Marina bouncing off the ‘all-new Chevrolet Trax LTZ’ have been worth the drive. It’s a fitting end to a proper urban adventure thanks to the crossover SUV. 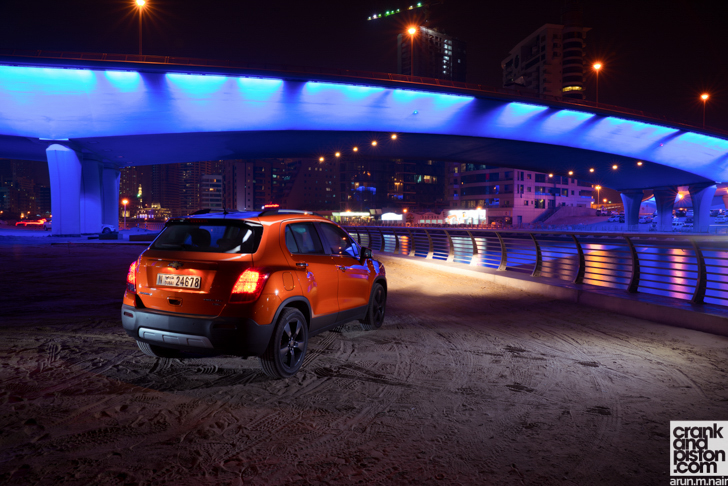