Jaguar posts a quick recap of the 2013 Mille Miglia, an event that saw the British company remind all concerned of their endurance racing heritage. 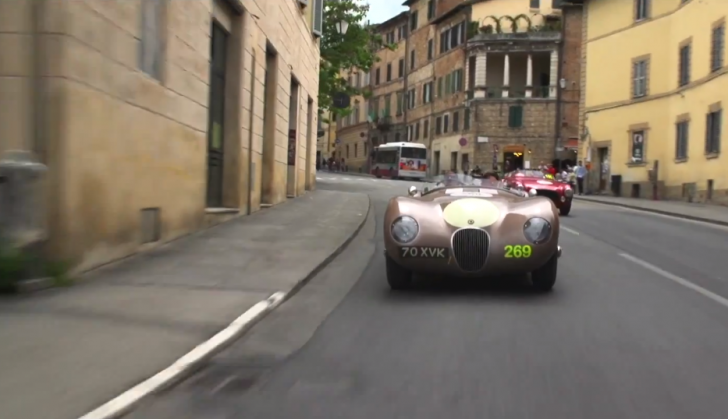 We’ve tried to keep a lid on this, by not being overly showy or reporting as we go along, but crankandpiston feels very proud – and knackered – to have been on the 2013 Mille Miglia. If you want proof, check out 1m 26s. You can’t actually see any of us, granted, but one of the team is in that white F-Type, honest!

As no doubt you’ve gleaned from the comprehensive photo gallery that came back with us from Brescia, Ferrara, San Marino and Rome among other points on our Italian sojourn, classic car enthusiasts were in their element. Everything from pre-war Bugattis and Alfa Romeos to 1950s Mercedes and Porsches were on display and on the road, keen to live up to the tradition imposed by the original competitive Mille Miglia. Then there was Jaguar’s offering.

As well as three C-Types – one of which rocketed Jaguar, driver Stirling Moss and co-driver Norman Dewis to fame in 1952 when they completed the 1500(ish)km route with new prototype disc brakes – and three XK120s, Jaguar Racing Heritage had a fleet of new F-Type roadster fresh from their Spanish launch, as well as a couple of celebrities. The face (and buttocks) of Dolce & Gabbana David Gandy, Mrs Duran Duran Yasmin Le Bon among others, while 1988 24 Hours of Le Mans winner Andy Wallace and drive channel’s Chris Harris were out in force to represent the motoring world.

Wonder if Andy remembered to fill the car on his way home…?