Porsche unveils the new 911 Turbo to the region alongside the performance savvy GT3 and the Panamera S E-Hybrid at the 2013 Dubai Motor Show.

The brand new Porsche 911 Turbo proved to be Porsche’s star attraction at the 2013 Dubai Motor Show.

The new Turbo – a range which this year celebrates its 40th anniversary – is the latest in a range of new 991 generation Porsches to make its regional debut, following the unveil of the Carrera 4 and GT3 models (the latter of which was also displayed on Porsche’s stand in Dubai). The Turbo’s regional debut comes shortly after images of a cabriolet version were released ahead of its expected arrival next year. 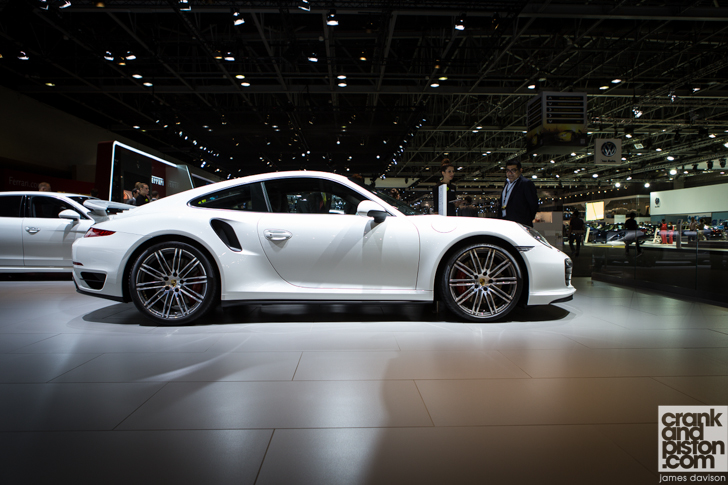 Powered by Porsche’s 3.8-litre biturbo six-cylinders, the 911 Turbo runs 520hp while the more powerful Turbo S produces 560hp. This signifies a 30hp increase in power whilst at the same time the 9.7L/100km reading is a 16 per cent reduction in fuel consumption.

The new 911 Turbo also boasts additional black air scoops in the front, a ‘turbo’ badge on the rear lip spoiler, an air intake in front of the rear axle and the widest rear axle of any 911 model currently on Porsche’s range: the new Turbo has a wheelbase 100mm longer and 51mm wider than the Carrera on which it is based. Both the Porsche Turbo and the Turbo S sit on 20-inch bi-colour alloy wheels. The new all-wheel drive system also allows for greater road holding and handling, as does its PDCC active roll system, adaptive aerodynamics and active rear axle steering for tighter turn ins. So capable is the new model that it can lap the Nürburgring in under 7m 30s. 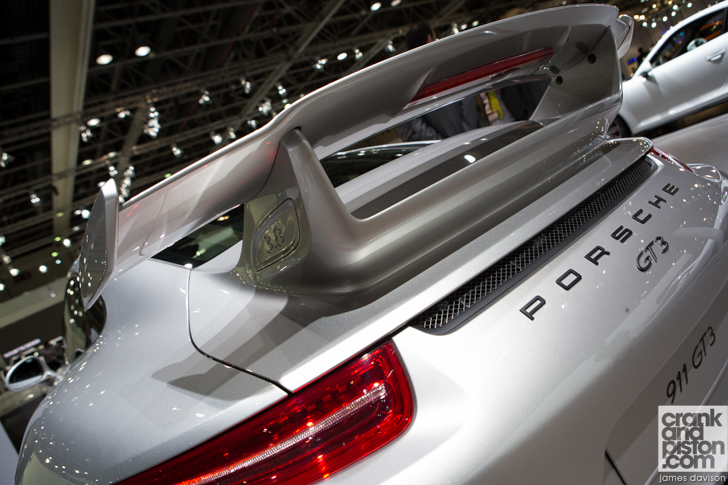 Also on Porsche’s stand was the new 911 GT3, a version of which crankandpiston.com drove on its international launch in Germany. Powered by the same flat-six as the Turbo, the GT3 boasts 475hp, a six-speed Doppelkupplung transmission (a first for the GT3), new active rear-wheel steering and a 0-100kph time of just 3.5 seconds. Top speed is pegged at 315kph. 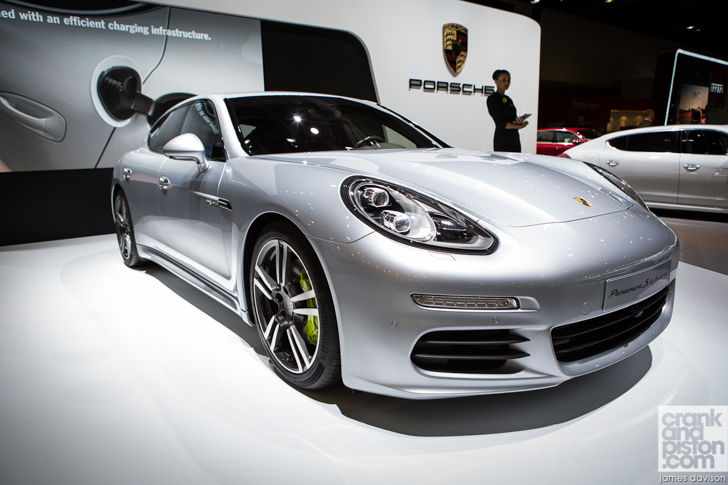 In an effort to further its campaign for greener motoring, the new Panamera S E-Hybrid made its regional debut at the Dubai Motor Show. The hybrid powertrain comprises a 3.0-litre supercharged V6 and an electric motor to produce 416hp, acceleration from 0-100kph in 5.5 seconds, a top speed of 270kph, and a 3.1L/100km fuel economy reading. To check out crankandpiston‘s test drive of the Panamera 4S and Turbo, click HERE.

Having been unveiled in Frankfurt, the new 911 50th Anniversary Edition – a model limited to just 1,963 units worldwide in deference to the 911’s launch year – will not appear at the Dubai Motor Show until the 9th November (911, get it?) and will remain on the stand for only one day.