A 1969 Lincoln Continental, nostalgia and The Matrix.

The fourth generation Lincoln Continental was designed by Elwood Engel and he single-handedly saved Lincoln from being dropped by Ford. His design convinced Robert S. McNamara – then Ford President – to keep the line going and the future of Lincoln was secured. The fourth generation Continental became a triumphant sales success as well as an iconic car within the marque.

With access to the internet and half a brain it is easy for an automotive journalist to do a bit of research and appear knowledgeable. Truth is, I know very little about American cars and when I stumbled upon this jalopy de Americana outside Robbies Motorsport Garage in Dubai there was a big bag of questions that needed answering.

I knew it was a Lincoln Continental but, rather than me drawing on my automotive knowledge, I was leaning heavily on my sketchy motion picture viewing. This generation of Continental was in Animal House, Kalifornia and Goldfinger (to name just a few of its starring roles) but it was its appearance in The Matrix that probably made the biggest connection.

Now, I did throw a couple of questions out to the guys at Robbies and this is a 1969 Lincoln Continental (The Matrix was a 1965 apparently). It is a fourth generation model and has a 460 cubic inch (7.5-litre in new money) V8. Everything is stock apart from the Strada 22-inch rims that strangely fit and don’t make it look like a donk. Truth is though, the guys at Robbies are too busy building a Type 65 Coupé or manufacturing a tow hitch for a Nissan Patrol in an effort to break a Guinness World Record to answer my questions.

Having a quick poke around this luxo barge of yesteryear revealed it had all the mod cons including electric windows, air-conditioning, power brakes and power steering. Not to mention the incredibly cool rear suicide doors. You just didn’t get this stuff on 1960s European cars, but then, this is the nostalgic era of America. This was the era of the space race and all eyes to the future. This was the era of visionary designers bringing a bit of sic-fi cool in to our humdrum world.

Thanks to – Robbies Motorsports

Supersports. The Bentley that’s more powerful than a McLaren 675LT 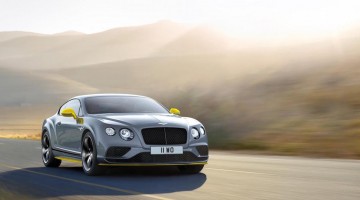